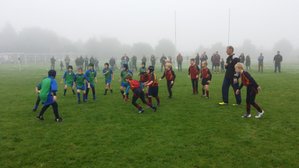 The coaches were delighted to see very few handling errors and very few turn overs. We only had a couple of excursions into touch in both matches but there does seem to be a growing awareness amongst the players of the need to stay away from the touch line.

In offence we saw an interesting array of attacking lines. We had the direct power running of Matt, Alex and Oli with some nice off loads. We had the mesmerising weaving of Rory. Freddie seemed to find some great lines to carve up the defence and James was quick to look to exploit space out wide with a lateral approach to his running. Seb made some good hard yards showcasing his twinkle toes style with Lucas making some useful contributions with ball in hand.

Just as satisfying was the commitment in defence. Thomas and Will seemed to have an unhealthy appetite for making hits and combined with a fantastic team approach to their tackling strangled the oppositions attacking efforts. There were some wonderful 3 or 4 man hits, led by Oli & Seb, being made in some desperate try line defence, resulting in a number of turnovers.

After a convincing win in the first match (7 - 1), Bournville appeared to be resting on their laurels in the first half of the second match as Chaddersley came out attacking strongly. The realisation at half time that the scores were level seemed to galvanise the team and they ran away with the match in the second half, led by some great defense in preventing Chaddersley from scoring (4 - 2).

Both matches were played at a rapid tempo and the boys were exhausted by the end of the morning (like the Hippos after 5 minutes).

Compared with the performances from the Moseley Festival, this group of players appears to have made some huge strides forward.

Some work is still needed in our passing. Looking to get the pass away before being tackled to set up a team mate in space and the speed of our passing could use some improvement but otherwise, a really bewitching performance.

Bring on Moseley on Sunday 15th