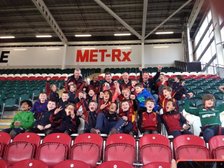 A festival of rugby!

This Saturday Bournville U9 took two teams (and a lot of family fans) to Leicester to play in one of the Leicester Tigers Festivals....

Those 2 teams showcased all that they have learnt this season and did their club proud.

Thanks to our coach company’s inability to read their emails properly and turn up on time we arrived a little late. But thanks to our excellent hosts rearranging the schedule we only missed warm up, split in to Bournville 1 and Bournville 2 and got stuck in.

Game 1 (please don’t ask me who we played in each of the games!)
The team took to the pitch full of determination but at the start it looked like they had left their heads on the coach. We all looked at each other to make the tackles and in attack we stood still making passes they were invariably dropped. But we stayed in the game and at half time we woke up. Lead by some ferocious tackling from George (a real theme of the day) we started to disrupt our opposition and some boisterous support from Bournville 2 began to inspire everyone to get stuck in. George was also able to break their defensive lines and the team followed.

We eventually found parity on the pitch and according to the referee came away with a 6-4 win (n.b. the coaches thought it was a draw but we always teach the team not to argue with the ref).

Game 2
Following straight on from Game 1 we had no time to over analyse our performance and, perhaps as a result, continued to improve. The team all raised their defensive efforts and we continually shut down our opponents, forcing them back and winning turnovers as they used the touchline wisely. Archie and Will T started to take more direct running lines and our offload game was much improved although we were still too narrow in attack, constantly running back in to the tacklers. Our defence however was all consuming and we ran away 6-0 winners.

Game 3
What a great game this was. Both teams tackled hard and yet both teams managed to keep the ball alive and pose a constant threat to each other. There was nothing to choose between them.

The game was lost 2-1 but it was so close. The team looked to have kept another attack at bay when, on the last tackle, our opposition threw a long pass. Will T went for the intercept, juggled it once and then knocked it on. Instead of a breakaway score that would have taken us in to the lead the tackle count was reset with the ball close to our line and 5 tackles later they forced their way over for the winning score. We still had time to come back and tried hard but just couldn’t find the score.

Game 4
Before this game we urged the team to give it everything and see what they could do. Well they could do great things!

George’s tackling was as fearsome as it was all day (1 particular hit was outstanding – he even did the seemingly impossible and hurt himself – albeit briefly).
Will B decided that this was the match where he was going to back his pace and scorched away for 2 great scores.
Thomas H who had been quieter than usual made a couple of great tackles and dived over for a late score.
Oli C began to match his direct bullocking runs with some deft offloads.
Rhys, man of the match in the previous game, continued to tackle effectively.
Finn, running hard, continued to put his head in where it hurt but bounced up time and again to make another tackle or another darting run.
Will T (Billy) remembered what a handful he can be when he puts his head down in his running but keeps his head up to see where the gaps are and make his passes count.
Christo began to take up the ball with increasing confidence, running fast and using the ball wisely.
And Archie shook off his injuries to round off a terrific team try full of slick handling and clever running.

We ran out convincing winners by 2-3 scores (coaches got a little over excited and didn’t keep count!).

This was a great effort from the team. Everyone had their moment and everyone can be proud of themselves but George’s performance was terrific and he fully deserved the Player of the Day tag!

Bournville U9s are notorious for getting off to a slow start when it's a bit on the cold side. Add to that an hour in a coach and it was no surprise to find Bournville 2s taking their time to get into their stride.

Game 1
In the first game we were fortunate that our lack of intensity in defence wasn't punished by our opponents. It was handling errors and touch rather than a solid set of six tackles that kept the scores close. In the second half thought the team started to warm up. Led by some incisive and aggressive running from Matt we started to break their defence down and pull away. On the defensive side, Ollie had suddenly woken up and was putting in a strong shift in defence. In the end we finished comfortable winners (not sure of the score)

Game 2
In the second game we seemed to have gone back to sleep. Admittedly, we were up against a strong and well drilled Wrexham side that brought a lot of muscle to the game, if not a great deal of imagination. However, defensively there didn't seem to be a great deal of interest. In attack things were static and the passing was non-existent. It was a very disappointing display and it was hard to understand why. In the end we did well to limit the deficit to 2 tries.

Game 3
After a few stern words from the DoR a completely different team turned out for the third game. We saw Thomas and Elliott getting stuck in with some powerful carries. Defensively the whole team were stepping up to make their tackles, combining nicely to take the legs from under the bigger runners with Harvey and Charlie making some useful contributions. We were starting to make genuine turnovers whilst converting our own possession into points. In the end we came away comfortable winners

Game 4
With no time for a breather we were straight into our last game. We carried on were we left off. This team were not going to roll over as they had some good runners of their own and a strong defence. We were just behind at half time but the second half was a fantastic and committed performance. High pressure defence from the entire team with Will in particular throwing himself at anything that was moving started to force mistakes and turnovers. Aggressive and incisive running from Freddie and Matt saw us draw the scores level and then with two stunning length of the pitch trys from Rory, victory was secured.

In the end we won 3 and lost 1. Overall some good rugby and some very hard work which was rewarded with a top afternoon watching the Tigers. The team can be proud of their efforts but they could do better.