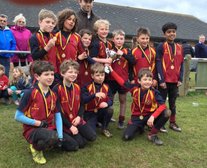 Signing off in style

Another Sunday, another bleak field on the outskirts of Birmingham. This could only mean one thing....the Droitwich festival. The setting was like something out of Arthurian legend only instead of sword and lance, the heroes were wielding rugby ball and gum shield. On this field we were about to witness an epic and legendary performance by the entire squad.

A well turned out Worcester side were unlucky to run into a Bournville team that were full of intent from the opening whistle. The first half was characterised by a ruthless defensive line that shut out the opposition and brought turnover ball. In attack the team combined strong running lines with great support yielding try after try. Things didn't get any easier for Worcester at halftime, with a pair of Williams and a pair of Thomases coming off the bench just to turn the screw. The lads came off the pitch as 6:0 winners

We know how strong this Bromsgrove side are having lost to them at the Sutton festival so the team were very fired up. This was reflected once more in a powerful defensive display which clearly unsettled Bromsgrove. The pressure from the defensive line caused uncharacteristic handling errors and wild passes that were gratefully pounced upon by Will T to produce some excellent opportunistic tries and the game was effectively won before half time. The team seemed to ease up a little and the second half was more closely competed with Bromsgrove getting a couple of scores but we still came away 8:2 winners

We'd not played this outfit before so they were an unknown quantity. That didn't change the team's approach of hard, direct defence and lightening quick attack. This approach continued to serve them well with Ollie and Thomas H running some weaving lines and Thomas U putting in a great defensive shift. The Blues couldn't break down the defence and with regular turnover ball, the tries came thick and fast. The Blues fought to the end and pulled back a try in the corner but we came away with a comfortable 7:1 win.

Up until this point we had only conceded 3 tries and this was against some quality opposition. Next, however, were the hosts, Droitwich. They were also unbeaten to this point and both sides knew what this game meant. Things were about to get a lot harder.

Straight from the whistle our defensive line was tested hard. The wall in midfield that was Kai, Jacob and Will V were stretched but managed to hold them out for turnover. Then we were treated to some of our own medicine and it wasn't pleasant. Droitwich came in fast and hard in defence, driving us back until we were forced behind our own dead ball line, not something I've seen before. This meant turn over to Droitwich with the ball 10 meters out. Again, the defence was tested hard and it took a classic crunching try saving tackle from George to force another turnover. This time the team made better use of the ball and ground their way back up the pitch with their seven tackles. On their set a big hit from Rory caused an unlikely turnover that was jumped upon and quickly took us up the other end with Mason going over in the corner to get the score. Seb made some useful contributions with his usual grinding runs, sucking in defence and creating a little space outside for Will T to pile through for a crucial score. From here it was an incredibly tense and fiercely contested tit for tat game which ultimately resulted in a 3:3 draw. With both these gladiatorial teams unbeaten and each with one game left it was going to come down to maths as to which team was going to top the pool.

Droitwich went hard on the DK Blues putting 10 tries on them. This meant the team had to win and score 6 tries on a very solid Old Halesonians side. There was a real sense of urgency in the team and with a brutal defensive line and sharp running, we quickly found ourselves 5 tries up. Old Hales weren't going to roll over that easily and came back hard either side of halftime clawing back two tries. We finished strongly lead by Thomas U dazzling with a weaving run through the heart of the defence crossing for a score that was rather harshly disallowed. He didn't argue with the ref, he simply stepped up with a crunching tackle to express his dissatisfaction. 6:2 at the final whistle meant we won the pool and would be facing Preston Grasshoppers, home of the great Wade Dooley, in the final for the cup.

There was an expectation of great things from Preston. As the ever optimistic soothsayer, Ollie pointed out, "they look good...,we always make it to the final and then lose." And perhaps lifted by these sage words the team went in a little tentatively. They had some good runners who ran like players expecting to break tackles and score tries the direct way. Unfortunately for them though, this is not how you score tries against the Bournville wall. Wave after wave of attacks were made only to be met by relentless tackling, often with two or more team mates piling in to make the tackle. The way we kept them from going over after they had a number of drives right on our line was the stuff of legend.

As the half ticked on and still Preston had not scored a bit more belief started to creep into the team. Perhaps Ollie the soothsayer of doom was wrong!?

A break from Jacob saw us find our way in to their half and then quick hands from the team put Mason in for a try in the corner. Preston’s heads visibly dropped and by contrast our boys skipped in to their half time talk buoyantly.

Cunning use of the bench by il Directore Underwood saw the team really ramp things up in the second half. A quick try straight after half time (Seb again sucking in defenders before quick ball from the set tackle put us over in the corner) and then yet more effective and committed defense killed off Preston’s spirit. With new found confidence Bournville went for the kill and came away 5:0 winners. A truly awesome performance.

It's hard to pick out any single factor that accounted for the results, today. What was clear was that great team work counts for so much as Leicester FC are showing us. Everyone worked their socks off and delivered their individual performances of the season. When you have the whole squad performing at that level, you are going to be tough to beat.

And so the season ends in style! A season where all our players (at every festival, match and training session) contributed and excelled with their skill and their attitude. We play with great spirit, as a team, and with a smile... As rugby should be played.