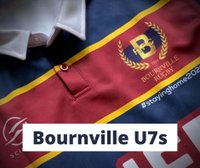 Down but by no means out...

In glorious sunshine and rather squelchy, muddy conditions, 13 keen Bournville U7s turned out to face their contemporaries at Camp Hill. The players were split into 3 teams, rotating across 3 pitches so that 9 games were played in total.

Whilst the headline score would suggest a hard day at the office for the Bournville sides, the reality was that the games were close in score with both sides playing some good rugby at times but also falling short in familiar areas.

There were some great individual tagging performances at times and on occasion, signs of a team defence starting to emerge. Where Camp Hill benefited most was more consistency in their support play of the tagged player, so maintaining the momentum of their moves. They also had a few speed merchants who doggedly kept going from side to side until they found the gap and then the try line. If we can sort out our “shuffle defence” and force more of these types of player into touch (or tire them out!) I know we will see a very different result. Whilst individual tagging was intensive at time (Zahid, Nieve, Ruby, Danny, George Br, George L) it is hard to maintain during all of the games and some players noticeably tired towards the end. So as already identified in previous matches, a focus on developing a team defence will be top priority for the coaches when we return to training! In terms of attack, again some pleasing passages of play with great direct running from Tom, Nithin, George Ba, Nieve, Toby, Alfie and also support play from George L (again). We even managed to get Oli running forwards by the last game resulting in a great individual try. The last point the coaches picked up on was that the referees were stricter about offside/forward passes than we have been to date. So we will look to put more emphasis on this during training, now that the group have more game experience under the belts and hopefully will better understand the concept in future.
Highlights included the “girls try” with Nieve and Ruby combining brilliantly to run almost the length of the field together to score, leaving Mrs McNally waxing lyrical about girl power to a rather bemused referee! Finally, a special mention must go to George Brown for encouraging and helping Harry during the last match. Harry, a little short of confidence, reluctantly came on for the injured Oli but with George’s encouragement ended up nearly running the full length of the pitch, just falling short of the try line. Well done George – duly noted for the end of season assessments/awards...

All in all a great experience for the whole team, our thanks to Camp Hill for hosting us today and if we can focus on the learning points then it should make for an interesting return match in March!

Next week (7/12) will be away at local rivals Moseley U7s. Please respond to Hannah when she puts out the email notification during the week, so we can gauge numbers for the away game. Thanks.