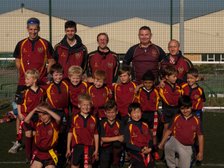 17 players headed to Billesley Common on a very windy day.
Returning to the scene of their first competitive games back in October, expectations were high to maintain their positive start to the season.
The hard work at training is certainly starting to bear fruit. "Blitz" tagging has become the norm with all players pushing forward into the opposition quickly and aggressively. Passing has improved with off loading when tagged faster and to teammates hands!

Moseley had the benefit of large squad numbers and were able to rotate players regularly. They had some good runners and passed the ball well which unlocked our stern defence.

Overall, we came away with a narrow victory and looking forward to Balsall & Berkswell on grass.

Focussed as individuals, and really pleasing teamwork. Lots of linking up. They listened well to advice, and most importantly enjoyed it. Our U7 group are getting a real reputation for their defensive work, and the Rangers were no exception. The opposition coach was gracious enough to congratulate the lads on their work, which they took really well. Overall, a great performance

The Bears played some excellent rugby today with accurate passing (no panicking when tagged!), communication and consistent support play. Some fantastic tags were taken and we were disciplined when re-starting to line up in defence. The Bears played as a real team and should be particularly proud of themselves given we did not have the luxury of any replacements (unlike the opposition). Really encouraging and all round a superb performance Bears. Keep it up.

Thank you to the parents for helping out and overseeing the Stags. Despite not winning a game, they came very close in a couple of their games. Some good running and high enthusiasm were shown in all matches. With half the team new to rugby this season they should all be very proud at how they stuck at it!

Whilst being a new genus of team name for the U7's, as we have never fielded 4 teams before, our play did at times resemble a heavily built wild ox! Straight running and a no nonsense approach to getting to the try line was the order of the day. If there was a gap, then that was the way to go for all the players, head down and away I go. Blitz tagging was prevalent in all games along with a sweeping defense that pushed the opposition into touch and won turnover ball. Attack was strong and the team worked well together in passing quickly when tagged showing excellent support play. This was evident in several tries being scored from support runners taking the pass without stopping and breaking through to score! An excellent performance and unbeaten. The opposition coaches all praised the teamwork shown. Well played boys!!