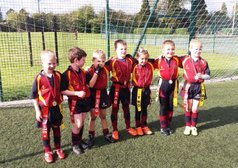 Festival Fun in the Sun.

Not just the first festival of the season but the first games against an opposition!
Only one team had been entered at the Moseley Festival which was being played under the new RFU regulation age grade rules which meant it was a non-competitive festival with all players receiving a medal for participating.

The squad of 8 players arrived at a sunny Billesley Common full of first game excitement and nerves. A light warm up followed by a pre-match toilet break and we were ready for action!
Our opponents were Moseley, Stourbridge, Nuneaton and Old Sills.

From the moment the first whistle blew, Bournville took the game to our opponents with no pre-match nerves shown. Strong tagging, running forward, passing backwards, support play and team talking were the order of the day.

As each game progressed all the players grew in confidence and played some really great rugby. Against some very good teams we remembered what we had practiced in training and showed a real competitive edge.

The squad should be very proud of how they played as the coaches are! An excellent start to our season.

Thank you to all the parent support as well which is really appreciated.