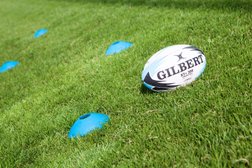 Rusty performance for first fixture of 2017.

Re-arranging this as a home fixture meant that we were able to have our first fixture of 2017. Although Worcester only brought a small squad of 6 players, from our squad number of 22 on the day, we were able to field 5 teams for a round robin set of matches.

It was a mixed morning with all 5 teams having both high and low points in play. Each team played Worcester once and we showed great attacking promise remembering to run forward and to support the runners. However, at times our defensive lines vanished leaving large spaces for the opposition to expose.
Worcester played some great attacking rugby which spread our defense showing us how to keep on pushing in attack.

Lack of competitive games against an opposition showed but as the games progressed, memories returned and there were some good examples of side steps and dummies from the Bournville players plus "Jazzy" feet were evident from those who attended the Leicester Tigers coaching morning on the Saturday.

Key things the players need to remember is to move forward in both attack and defense.

Keep up the good work!