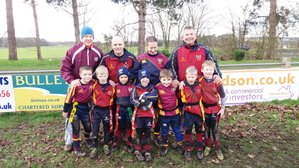 U7's not stuck in the mud against strong opposition.

The day started with a deluge of rain that promised to cancel proceedings. However, the rain stopped, the clouds parted and the sun shone, for a while at least and our hosts said "Let's Play Rugby!". Thank you Stourbridge for keeping things going.

Two teams were entered into the first festival of the season and a squad of 8 players headed over to the Black Country.
However, due last minute withdrawls from our squad, we were only to field one team.

We were pitched in a strong group against teams that we had not previously played, Stourbridge, Bromsgrove, Old Hales and Bridgnorth.
All four games followed a similar pattern. An early score or two for Bournville only to be pegged back by the opposition.
Our defense at times did not mirror the Great Wall of China or the Maginot line, stout and robust but more of a part constructed fence, gaps where the panels need inserting!

However, once we woke up to this and pushed forward, the tagging was superb with all the players getting right up and at the opposition.
Teamwork was to the fore with all the squad working together.

In attack we really started to show our "Jazzy" footwork and "Wiggly" hips in swerving around players! Everyone one of the squad score at least one or more tries on the day. Support work was excellent and quick thinking when the ball went to ground from the opposition, resulted in several turnover tries! The drills to pick the ball up from the floor do work!

All the players should be very proud of how they played, a great team effort, especially as it was a long day.
Thank you all for sticking it out and making the trip on a wet Sunday morning.

More festivals are to come in April so everyone can get the chance to play.