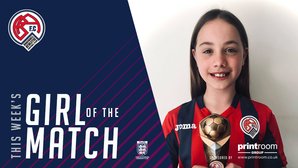 So finally we returned to football on, and we have 4 games to see out this crazy season. 1st up at ours was Goring Robins. On this beautiful sunny morning we see the mighty Rockettes get underway. The girls had a slow sleepy start and it took some motivation and direction to get them going. Goring played 3 strikers but once Maisey & Jade got going, these 3 were no match for our solid 2 defenders. Lilly and Kacie were up top, causing havoc, but couldn’t find a way though. Midfield duo Lucia and Lacey battled and kept trying to attack with Katie and Poppy D on the flanks. Handball see us get a 1st half penalty, which Lacey stepped up, and calmly powered into the left side of the goal!! I told the girls to keep their focus and we continued to attack. Second half see Libby, Talelia, Tia and Eva make their appearances. Eva driving forwards constantly and causing upsets. 10mins later we adjusted the team which then see the Elisha power her way to through the defence to score our 2nd. Kacie and Elisha worked tirelessly together and nearly scored again. Eva too came close. It took a run from the halfway line, through 4 players and a shot into the bottom corner for Lacey to sea the win. Amazing solo effort!! The whole team could of got a trophy each for their efforts but it was Lacey who took this weeks GOTM!

Finchampstead at home next weekend for game 2!