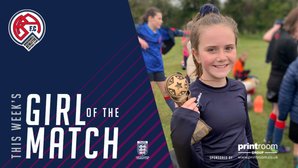 This week we sailed over in the rain to St Crispins. Ashridge were the opponents. A Fiery start saw, Lilly, Tia, Libby & Livvy O battle their way through the midfield. Livvy and Kacie both came close in the first 15mins. Captain Eva was bossing the wing with her rapid runs and Poppy d doing the same on the right. Katie had a quiet shift in goal today but pulled out her usual great stops from the few shots Ashridge gave. Jade was her usual solid rock at the back, with their strikers not finding a way through. The efforts of Tia, Libby & Lilly contained the opponents until the break. Second half the rain stopped and we added Lacey, Lucia, Talelia, Elisha and Maisey. A good combination of passes see Elisha fly down the flank and fire the ball into the box for Lucia to calmly finish! Ashridge then tried counter attacks but it was no match for Maisey & Jade. Some good passing from Talelia and darting runs added to our dominance in their half. The game started to heat up with a few strong tackles from Lacey and the twins, also Eva and Poppy had some decent battles. A few moments of good passing added to great performance. The whole team produced another fine display.

Today’s efforts see Talelia grab GOTM! Well deserved, keep it up! Jason and Coach Chris (Phil) were pleased with all the efforts and we will take that to next weeks home game v Tilehurst. Well done team. Rockettes!!