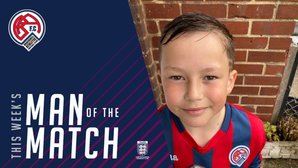 The Royals were at home to Henley this week. With Max and a Teddy missing the Royals would have to give it their all and they didn’t disappoint.

Jack in goal was making some great one on one stops. With Perry and Bronte tackling and defending brilliantly the Royals were able to move up the pitch quickly with some great passing and movement from Toby, Yaw and Frankie. The Royals kept the pressure on Henley. Yaw scored with a great driving run and finish. The Royals dug even deeper and Frankie added to his tally for the season with a great strike. Henley kept the pressure on and soon got back into the game. But Toby and Aarav’s constant chasing and running caused Henley problems and then Toby latched on to a loose ball on the edge of the area and found the back of the net with a cool finish. The game was end to end with the both teams playing good football and it made for a nervous finish but then Aarav got the ball on the half way line and ran at the defence and with a superb strike put some day light between the teams. Henley kept running and the whole Royals team matched them. Frankie was man of the match with another great performance but ALL the players today gave it their all today.

Well done Royals.
Keep it up.