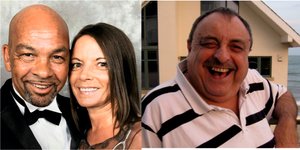 Club saddened at the passing of two 'old boys'.

The rugby club were saddened to hear of the passing of two ex-members recently, Dave Wightman and Steve Russell.

Dave Snowy’ Wightman joined Braintree Rugby Club in the late 60’s along with his brother Charlie, and both enjoyed their time playing in various teams. Dave went on to play American Football in Chelmsford and became a very proficient golfer. He became a publican and had success with an American style bar in Braintree called MR J’s. He eventually became landlord of the Nags Head in town, which he ran successfully up until the time of his death, which occurred after a short illness. Those wishing to pay their last respects to Dave may do so when he leaves the Nags Head at 1.15pm on Friday 23rd October. Please maintain social distancing. Donations may be made to Farleigh Hospice or Macmillan Cancer Nurses, who all helped and cared for Dave, via www.drobinson.co.uk.
Steve Russell joined the club in the early 70’s having played rugby for the West of Scotland and Brentwood Rugby Club . He was one of the first people to help coach the club and became a valued, if somewhat vociferous, supporter on the touch line. He went on to assist a couple of other clubs in Essex but still kept in touch with Braintree RFC by attending Old Boys’ lunches.
Our thoughts are with their families and friends.
Share via
FacebookTwitter
https://www.pitchero.com/clubs
Recent news