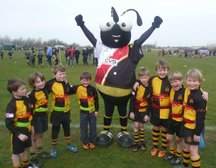 Braintree Under 7's Fielded 2 teams at the Wendens Abo Festival this weekend, 8 out our 14 age group participated and it was very rewarding to see them all enjoying themselves on the pitch in the sunshine at Carver Barracks

There were 4 pools of 22 teams, from Wendens, Royston Saffron Walden, and Shelford as well as Braintree.

It did not start well when both Braintree A & B teams lost their first games against the county champions Wendens Abo, this did not dampen the teams spirit it actually did the opposite and lifted them with a new determination to win.

The 2 teams demonstrated all the hard work from training into practice and done what they do best, hold ground in a strong defence and tag, and push forward with strong running and good passing skills along with excellent support play to overcome and score tries

Both teams won their next 3 games with good try differences, which put Braintree A & B teams up against Wendens in the final.
Both Braintree teams lost their final games by two tries which is not a bad defeat against the county champions.

I along with the other coaches would like to say that the boys have showed such improvement and determination over the last couple of months, their team work skills have grown and they have really bonded.
Let us all encourage them so that they can learn and build from this weekends festival and go forward to the Essex County RFU Competition on 13th April and bring home some silver.