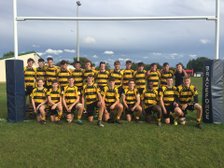 A good showing from the young Academy side

against a mature Cambs team

There were lots of positives to take from the game which saw a much more solid all round performance which we were lucky not to nick at the end. We matched the opposition for tries but were unable to equal the conversions and that ended up being the difference between the two teams.

With a predominantly u17 squad and a number of boys out due to injury or unavailability this fixture was always going to be tough early in the season. Cambridge were a big, strong outfit who took the game to Braintree from the off but to their credit the boys kept building the phases until they created the space required to unleash the backline.

The physicality of the game took its toll on a number of boys and the touchline had a sick bay feel by the end of the game but the team should be proud of the determination they showed throughout.

Positives
Strong work rate from 6,7 and 8
The scrum was solid despite being a smaller pack which gave the backs some ball to work with
Counter rucking was effective from the backs and forwards

arrive in kit
bring your ones