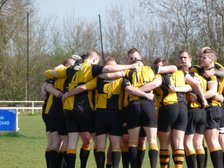 A MAKESHIFT Braintree side stumbled to an unexpected defeat to bottom club Mavericks despite scoring more tries than their opponents in an action-packed encounter.

A MAKESHIFT Braintree side stumbled to an unexpected defeat to bottom club Mavericks despite scoring more tries than their opponents in an action-packed encounter.
Tree’s cause wasn’t helped when they lost a second row to illness on the morning of the game and then had to rush their warm-up due to a late arrival in Brentwood.
And the loss of fly-half Joss Adams and flanker Henry Williams during the game with a hamstring pull and a head injury respectively severely disrupted the rhythm of their game.
The home side kicked off and immediately put the black and ambers under pressure by capitalising on a very poor defensive clearance kick.
But the visitors eventually settled and took the lead when they won a scrum on the half way line after determinedly playing their way forward.
Tree secured possession and number eight John Smillie picked up from the base before setting off on a strong run.
He fed the ball to prop Lloyd Hardin who crossed the line to score after four minutes, James Abbott converting. 7-0.
But six minutes later Mavericks were level from a converted try of their own when Tree knocked on after forcing turn over ball and then lost possession in the resulting scrum. 7-7.
The hosts then ran straight back through Tree’s defence from the re-start and some poor tackling allowed them over to score and convert again. 7-14.
The black and ambers managed to string some phases of play together and a strong driving maul from a line-out enabled full-back Keelan Joslin to score out wide on 20 minutes. 12-14.
And they stormed into the lead nine minutes later when the home side conceded a five-metre scrum from which Smillie picked up and crashed over to score. 17-14.
Things got even better on 32 minutes when Smillie grabbed his second following turn-over ball at the scrum. 22-14.
But just as they looked to be getting a foothold in the game poor tackling enabling Mavericks to run in to score a converted try right on the half-time whistle. 22-21.
The home side picked up where they left off in the second half scoring another converted try shortly after the re-start. 22-28.
Tree weren’t about to let the game wriggle from their grasp though and on 50 minutes yet pick-up by Smillie from a won scrum saw him launch a bullocking run down the touchline.
The powerful number eight then fed the ball inside to Abbott who crashed over to score before converting his own try to put his side 29-28 ahead.
Unfortunately Smillie was spun around in the tackle as he got the ball away and went down heavily on a shoulder, seeing him leave the field and reduce Tree to 14 for a while before he managed to return to the field to see the game out.
In a topsy turvy affair the home side wrested back the lead on the hour mark with another converted try. 29-35.
The last 10 minutes belonged to the visitors as they put Mavericks defence under constant pressure and pinned them in their 22.
With five minutes to go Tree were awarded a penalty for continued offending at the scrum and threw the ball out wide to stand-in winger Hardin who crashed over to score. 34-35.
Unfortunately the conversion was too tricky and although Brian Joslin’s men continued on the front foot until the final whistle they couldn’t find the winning points.
BRUFC chair of selectors David Gilder said: “It was a very poor performance by us against the bottom side in the league.
“The day started on the wrong foot after we lost a second row to illness and it was too late to call up a replacement. This meant last minute reshuffling and a reduced bench.
“Losing three players to injury during the game didn’t help on a bizarre day when we dominated the scrum for the first time this season and had loads of ball.
“Sadly our normally resolute defence faltered on far too many occasions. We flattered the home side but we were so poor that they deserved the win.”
Joint coach Joslin added: “I'm still scratching my head as to how we lost. Neither side really dominated but most of Mavericks’ tries were under the posts making conversions easy.
“Our makeshift pack surprisingly dominated the set piece, which was a positive, but our defence round the breakdown let us down a bit, which was a bit disappointing.
“Credit to Mavericks who scored some fine tries and certainly didn't look or play like a team bottom of the table.”
Tree, who have dropped to fourth in the table following Saturday’s defeat, will be looking to make amends this weekend when they travel to the Essex coast to play Clacton.
BRUFC: Keelan Joslin, Young, Abbott, Hine, Murray, Adams, Clark, Hardin, W Turner, Perry, T Carslake, Lee, Williams, Benfield, Smillie. Reps: Colebrook, Richards.