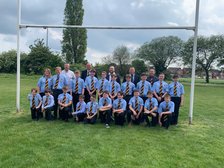 A fresh start to the day

A Game of 2 Halves

Never has the saying 'A game of 2 halves' been more apt. Having not played for 3 weeks a bit of rustiness could of been expected, but the B'tree team started the stronger. Playing with the slope on the pitch there was some strong attacking play from good possession, only being stopped by some committed home defence. The scrum worked particularly well both on our 'put-in' and by putting pressure on the R'ford 'put-in'. Eventually the pressure paid off for B'tree, a movement of the ball through the hands was halted 5 metres out, but recycling the ball well resulted in Jayden Bennett scoring a try. There was more to come from B'tree's attacking play, the ball moving around through various players, eventually getting into the hands of Ethan Scherer who produced one of his familiar strong direct bursts to score a try.

The 2nd half started and it was immediately evident what ever was said in the Rochford camp at half time put a bit of fire in their bellies, their attacking play and ball retention seemed more committed, and it was now B'tree's turn to try to absorb the pressure. When B'tree's defence did cause R'ford to make mistakes the R'ford scrum also came out with a different mindset, resulting in getting the upper hand in that area of play also. Pressure eventually paid off for R'ford as it did in the 1st half for B'tree, with some B'tree players seeming to tire in defence after the break, resulting in R'ford scoring 2 try's and stopping B'tree from scoring at all in the the 2nd half.
Lots of positives evident for the Braintree team to take away for the second half of the season.