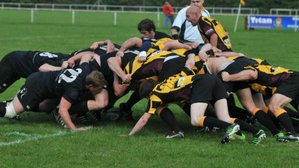 WITH Braintree’s first team enjoying a weekend off it was left to the club’s second string to carry the black and amber flag forward on Saturday.

WITH Braintree’s first team enjoying a weekend off it was left to the club’s second string to carry the black and amber flag forward on Saturday.
And the seniors-in-waiting did so with panache, hammering Essex rivals Maldon’s second XV 90-5 in front of an enthusiastic Robbs Wood crowd in the semi-final of the Alder Cup.
But in truth the scoreline flattered the black and ambers, whose opponents never stopped going for the entire 80 minutes, only to be thwarted by their hosts’ impenetrable defence.
Joint coaches Neville Potts and Nigel Brand had every reason to be proud of their troops, who seemed to score every time they managed to turn over Maldon ball.
Watching first team coach Brian Joslin said: “It was a great game to watch. On paper it looks like an emphatic win but in reality it was far from it.
“Maldon applied a lot of pressure from start to finish and never stopped coming at our boys, but they refused to yield. It must have been heartbreaking for them.
“When their attacking moves finally broke down we seemed to run the ball straight back at them with pace and clinical finishing, scoring every time. It was a superb team effort.”
Joslin singled out youngsters Max Power, Henry James, Sean McBean, Henry Williams and Luke Markey for praise.
But in a game which saw previously injured first team regular Josh Hine return to action and veteran John Wishart play a full 80 minutes, it was skipper Neil Richards who was Joslin’s man of the match.
Joslin turns his attention back to Tree’s first team this Saturday when they entertain Millwall in the Canterbury Jack Essex Promotion League, while the 2nd XV entertain Barking IIs, also at Robbs Wood.