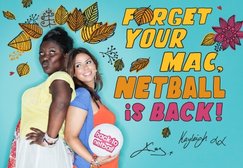 Want to see what netball is like having not played for a few years?
Haven't played since school?

Ashford Netball League are running some Back to Netball sessions for teenagers and beginners aged 16 and over. If you just want to try netball this might be the option for you although if you want to join a club with a progression route from under 11s to adult then Breakaways could be the better option as we offer a number of teams and age ranges. Back to Netball is designed for beginners who don't want the formality of a multi-team club system.