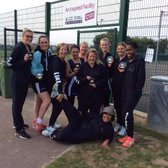 Breakaways aimed to go better than last year where we reached the semi-finals.

This year, we won all but one game on the Saturday. The game that was lost involved injury to Sally which interrupted our play. She then recovered to carry on playing. We finished Saturday top of the pool to go into the Cup for Sunday.

In the pool Sunday we again met the team we lost to on Saturday but with Sally back in play we managed to come back from 5-2 down to draw which meant having won the rest of the games we again topped the pool to head into the semi-finals.

The semi final was a tense affair. With only 6 minutes each way, any turnover could be pivotal. We were behind all the way but proved tough and aggressive to draw 7-7 which meant extra time! This is where we pulled away. With the defence strong, the opponents didn't score and we won 13-7 to go into the final!

In the final we met Goldwyn (opponents from Ashford). Unfortunately this was a step too far this year losing 13-4 but onwards and upwards to next year!