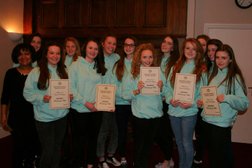 Winners at the Ashford AGM

Breakaways collected a number of awards at the AGM for Ashford Netball League.

Most notable were Breakaways White winning Lower Pool Galaxy. Run away winners by 3 points even with 3 deductions was a great end to the young juniors of the club who should be proud to win in the senior league.

Well done to Natasha Palmer and Molly Ryan who took home awards for the most star player nominations in their pool.