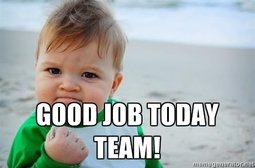 Juniors put in a great performance

On an extremely hot day the Eels completed their final weekend of regular League fixtures.

The U13's go into the play-off's as runners-up in their League which sees them in a home fixture next week. This Saturday they had a bye which allowed them to play two matches against Oxford RL at both U12's and U13's. The Eels won both encounters but the victory wasn't important as the true winner on the day was Rugby League.

The U15's travelled to Southend in a game which both sides needed to win in order to progress to the play-off's. After a victory against the Spartans the previous week, the Eels felt confident but had several boys from the that match missing through school commitments. It was therefore pleasing to gain a 54-18 victory. This now sees the U15's make the play-off's.

For many of our U17's this would be their last game in the Junior Leagues and they certainly went out in style by beating Hemel Stags 60-22. It's been a tough year for this age group but they've stuck at it and will be stronger for it.

Good luck to all of our sides in the play-off's next week and also our U14's who will be playing in their tri-team finals at Invicta.