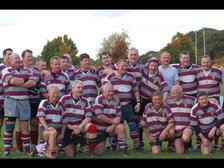 Unfortunate news has been received that Taffy Howells passed away due a brain tumour on 21st November 2020.

Taffy initially played for the colts before spending a few seasons playing for various senior teams.

One such match was that organised on behalf 3 of the Vets team who had reached the landmark of 50.

During the match Taffy (kneeling 3rd from right) sustained broken ribs. The main issue with that was he was going skiing the next day and to hide the pain from his wife, so he took morphine to survive the trip.

Taffy moved away to Winchester where he joined their rugby club and coached in the junior section.

There will be a memorial service, but a date is yet to be decided on.

Our condolences go out to the family.