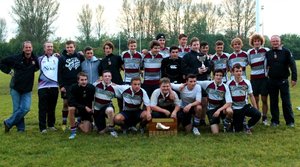 Brentwood Rugby Football Club welcomed 14 visiting teams from Kent, Suffolk, and Essex together with two of their own, their supporters and the President of RFU, Paul Murphy to our annual ‘Golden Boot Tournament.’ This tournament first started 44 years ago and is played for the ‘Andy Joselyn Memorial Trophy’, renamed in honour of a former 1st XV Captain, Player and Clubman of the year. He was a very active supporter of the Youth section at the club and sadly suddenly died at the age of 38.
So started a gloriously sunny, bright and warm Autumnal day where the King Georges Playing Fields was a riot of team colours playing plenty of fabulous rugby. There were also various foods, refreshments and music creating a friendly family atmosphere as the 16 teams battled it out for the trophy.
At the end of all the ‘Pool’ games Brentwood ‘A’ were in joint first position with Dartfordians. As the rules dictate this went to a ‘Toss of the coin’ decision which Brentwood lost. This left the boys with the challenge from Westcliff for their Repêchage match which Brentwood won. Next they met Battersea Ironsides in the Golden Boot Semi-Final. Both sides showed great passion in their rugby, both hungry for the final and a chance of winning the trophy. It was not the easiest of games but the Brentwood boys continued with drive and determination to win the game.
Throughout the day hopes were high as our brave team saw off tough opposition in their previous games to make it to the ‘Golden Boot Final’ against Colchester, one of the strongest sides in the Eastern Counties.
The finals games were only 10 minutes each way and the play reflected this by being very fast paced with little room for error. Brentwood was defending gallantly with some tense moments close to their line and conceded their first try of the day. However, with some outstanding team work and two great tries from Ed Greenfield, both converted by Jack Dorrington, Brentwood won the game and the Golden Boot Trophy for the first time in five years.
This was of course the top trophy of the day but there were also three other trophies to be won. The winners of those trophies were: Dartfordians and Westcliff who jointly won the Plate; Rochford who won the Shield and the Bowl final was won by Woodbridge.
Tremendous thanks go to Pam Joselyn and family for their continued support. Also to the local shops in Brentwood High Street who have generously supported us by donating prizes to help raise funds for the day. Thanks also to all the officials, coaches, referees, players, parents and supporters. There are many who helped tirelessly behind the scenes to make this day possible and a success, not all can be mentioned but their help and support was very much appreciated.