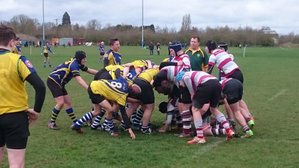 Under 16's come away from St Ives with a convincing win.

After Romford unfortunately conceding against us in the League, and us having had teal difficulties in securing an alternative Home Fixture. we managed to get an Away one against Sr Ives (Not the Land of pasties and Clotted Cream one!!). So... a trek down the M11 to Cambs, to a club we had never played before!
The first 10-15 mins or so gave the impression that we were in for a reasonably tough game.with their forward pack showing strength against ours, and their tackling and defence being quite good. However. once we got into our rhythmn, our passing and speed in the back line proved too much defensively for St Ives, and we went over the line with relative ease to score 9 tries and 5 conversions. Final Score 55-0. Extremely windy weather prevented the other 4 being converted.
Well done lads.
Share via
FacebookTwitter
https://www.pitchero.com/clubs
Recent news