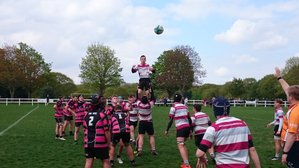 Under 16's Win 8-5 to take Plate against Thurrock in tense final.

In our second meeting in recent weeks, Brentwood were hoping for another convincing win against Thurrock in the Plate Final
Brentwood started the first half running down the slope.but our resolve wasn!t quite there to capitalise on it. Thurrock took first blood, but failed to convert. Score 0-5. Eventually, we managed to break through and cross the line, albeit that the Referee disagreed because he couldn't see it clearly. Continued pressure paid off, albeit some of our play and handling was untidy, and we managed to equal the score, failed to convert, but maintained score up to the point of half time.
In the second, with Brentwood running up the slope, we still lacked the fire in the first 10-15 mins. Two further tries disallowed in the second was quite frustrating, but with a penalty awarded, Brentwood went for the posts to go 8-5 up. We managed to hold off for another three and a half minutes after that, taking the Plate by the narrowest of margins, in what was a very tense match
Well done lads!
Share via
FacebookTwitter
https://www.pitchero.com/clubs
Recent news