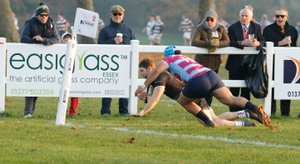 Slow start the difference in a pulsating match

With 3 big names still missing from the team that has started so well this season, Brentwood again looked to youth to take on a high-flying name in the league. Dan Suttle and Tom Lucas-Roast kept their place in the side after impressive performances against Guildford and Chay Pollinger made his first appearance since starting university to start on the wing. Brentwood’s slow start was the difference again on Saturday with Wimbledon scoring 4 tries in a blistering opening 20 minutes to lead by 19 points at halftime. Again Brentwood showed that they will not go down without a fight and went on to dominate the league leaders after halftime but fall just short for the second game in a row.

Wimbledon showed why they sit atop the league with an outstanding opening 20 minutes, with the forwards providing clean front foot ball for their dynamic backs they brought up their try bonus point with some lovely rugby. Brentwood got on the scoreboard with a long range Bradley Burr penalty and kept the score down with a great last ditch tackle by Chay Pollinger in the corner. That was the catalyst for Brentwood to grab the initiative and play some lovely rugby, both forwards and backs putting together fast, multi phase moves that were only ended by handling errors or good defence. They came close twice to reducing the gap but went into halftime trailing 3-22 but encouraged by some great defence which had kept them just in touch. Wimbledon had dominated the scrum and won multiple penalties which had contributed to the one sided start to the match but Brentwood felt if they could find parity up front they could get something from the game.

That’s exactly what they found in a scintillating 25 minute spell, where Wimbledon had enjoyed fast, clean ball in the first half, Brentwood denied them with smothering defence and quick counterattacking. Parity was gained in the scrum and this gave Brentwood the chance to use their own speedy backs. The hosts were rewarded with two great tries, the first following some great attacking rugby which opened up space for Charlie Wilkinson to get his reward for some great play in defence and attack, scoring in the corner. Burr converted expertly from the touchline and the home crowd sensed that their team could force their way into the game. They were celebrating another great try soon after when Adam Thomas took a lovely delayed Wilkinson pass to get his own reward, Burr again converted and Brentwood were no within touching distance at 17-22 with only minutes to go. It was to be the last time Brentwood got close, however, as Wimbledon regrouped and played some lovely rugby themselves. After massive pressure on the Brentwood line they crashed over near the posts to deny Brentwood a deserved bonus point.

A great game of rugby that followed a similar pattern to previous weeks, a low start and a barnstorming finish from Brentwood who played the better rugby in the second half but were undone by a late surge from their opponents. They are top for a reason and showed great resolve and skill to see the game out in an intense atmosphere and a home team that through great skill, strength and organisation, pushed their defence to the limit. Brentwood’s average age must have been a good 6 years younger than Wimbledon and shows the promise in the team that they can go toe-to-toe with a team full of National League experience.