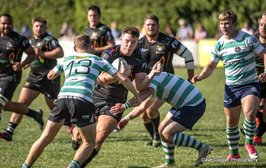 Bridgnorth v South Leicester Saturday 21st September – Result 74 – 16
Bridgnorth welcomed South Leicester to the Edgar Davies Ground for the first time with both sides looking to register their first league points of the season.
In the opening minute of the game the hosts got a great shove on in the game’s first scrum to win the penalty. A kick to the corner and subsequent line out win saw the backs move the ball to the wing for George Bvuma to score an unconverted try in the corner for a 5-0 lead. South Leicester then had a penalty for a no arms tackle and following the line out win hoisted a high ball which wasn’t fielded and the loose ball was pounced upon for South Leicester to take a 7-5 lead. A Jake Goulson try converted by Llew Williams gave Bridgnorth a 12 – 7 lead which soon became 12 – 10 following a successful penalty kick by south Leicester. Prop Ed John came on for the injured Joe Cave after 19 minutes.
Bridgnorth then gained a winning bonus point inside 20 minutes following tries from Luis Evitt and Ted Parker, the later following a good dummy to send the defence the wrong way and being converted by Williams to make the score to 22 -10. A great run from his own half by number eight Connor Nicholls extended the lead with an unconverted try which was followed shortly after by a superb penalty kick from the half way line for South Leicester making the score to 27 -13. Luis Evitt then bagged two quick scores to notch a hat trick of tries, both being converted by Williams to make the half time score 41 – 13 in favour of Bridgnorth.
Bridgnorth brought on Callum Bradbury and James Morgan for the second half and shuffled their backs around moving Mike Penn to full back and Sam Brown to fly half. On 50 minutes a converted George Newman try extended the hosts lead shortly followed by a push over try from a five metre scrum, Connor Nicholls bagging his second try of the game following the sin binning of a South Leicester player. The second half became a stop start scrappy affair with continual stoppages for injury, it was clear that South Leicester were playing for damage limitation, having won a penalty on 60 minutes South Leicester kicked successfully for goal to make the score 55 – 16. On 68 minutes seventeen year old wing Dan Brough scored an unconverted try and shortly afterwards Brough ran well to set up Callum Bradbury to score which was well converted from the corner by Llew Williams. In the final play of the game Luis Evitt scored his fourth try of the game and deservedly won the Tanners Wines man of the match award. Llew Williams converted to make the final score 74 – 16 in favour of Bridgnorth.
South Leicester are in a rebuilding process having been relegated from the league above and this is their third heavy defeat in as many matches, they gamely stuck at it, never gave up, and competed to the very end. A much sterner test awaits Bridgnorth next week when they host Coventry side Broadstreet at the Edgar Davies Ground.
Share via
FacebookTwitter
https://www.pitchero.com/clubs