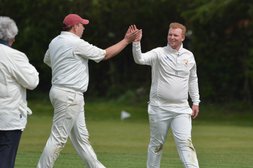 Tricky start for Second, Third and Fourth teams with positive aspects to take but room for improvement...

Bridgnorth claimed a highly encouraging and important second win on the bounce over a slightly weakened Halesowen side on Saturday, thanks to an effective team performance.
South African-born all-rounder JP Erasmus took the bowling plaudits on a slightly sticky wicket, including the key wicket of Shropshire star Alexei Kervezee, as the visitors were reduced to 48-5 after skipper Sam Whitney had won the toss. Beforehand, left-arm seamer Adam Quiney made yet another vital early breakthrough, demonstrating his genuine threat with the new ball, and received good early support from Dave Exall as the pair produced utterly parsimonious opening spells.

Left-arm spinner Sam Baugh was also rewarded with a brace of wickets as he continued his early-season form, but the visitors lower order worked hard to get them up to a competitive total. Erasmus (4-36) and Exall both picked up wickets late in the innings as the Birmingham League Division Two title challengers were posted a respectable 159-8 off 50 overs.

Openers Ian Gregory (43) and Erasmus (23) then made a solid start to the chase for the Cricket Meadow men, reaching 68 without loss to set a fine platform. However, wickets then started to fall at fairly regular intervals as the visitors fought their way back into the contest. Simon Gregory and Dave Exall counter attacked in typical fashion, as both illustrated some promising early-season form with the bat, but neither were able to take the hosts over the winning line.

After a few minor jitters, skipper Sam Whitney and Quiney finished off the job with nine overs to spare. The captain was delighted to clinch two wins in a row, but challenged his charges to take control of the game when the situation needed it.

“It’s great to get back-to-back wins against title contenders, but it would be nice to see someone stand up and take responsibility to see the team home. We’ve played well as a team and the guys are all contributing, but we’re going to need some special performance this year.

“We need to keep this going into next week’s game at Himley, which will be another challenging day for us.”

Bridgnorth seconds were unable to begin their first season back in the Shropshire League with a win, as they were undone by a former Cricket Meadow player at Newtown.

David Laird’s 69 proved to be a crucial knock on a tricky pitch, as the all-rounder chanced his arm against a threatening Bridgnorth bowling attack. Dan Kearsley (2-25) and Toby Hughes (3-38) were the pick of the seamers, Hughes in particular bowling an excellent fourteen-over spell. Ross Hurdley also bowled well to pick up a brace, before spinner Alex Yarnley (3-11) mopped up the tail.

But on a tricky wicket, Bridgnorth struggled early on in the chase as the slumped to 15-3. Skipper Matt Martin and Niall McAdam attempted to recover the innings, but a further collapse saw the visitors left with a mountain to climb. Returning keeper Rob Hughes and Cam Wallis showed admirable character and application to dig in for a draw, but it was eventually left to the final pairing of Kearsley and Toby Hughes to hold out for ten overs.

Agonisingly, it proved just one over too many, but the Cricket Meadow second string were left with plenty of positive aspects and lessons learnt from a different style of cricket that will face them this year.

The third string endured a chastening start to the 2019 season, as home side Wheaton Aston romped to a ten-wicket victory on green wicket.

Bridgnorth’s batsmen were undone by some variable bounce and movement, but were also left to rue some poor shots and two run outs after skipper Alex Thomas lost the toss when the decision to bowl first was clear for both captains.

Matt Bowler-Jones threatened early on with the new ball, but the hosts were in no real trouble as they cantered to the winning line.

A weakened fourth team were undone by an excellent all-round display from visiting all-rounder Abdul Khan, who followed an unbeaten century for the visitors with two wickets.
Lewis Hurdley and Norman Roberts were both rewarded for good opening spells with the new ball by picking up two wickets apiece, followed by a tight spell in the middle overs from Alex Thomas. But Khan marshalled the Wem middle order well, unleashing a range of shots towards the end to power the visitors past 200. Ben Cresswell and Huw Morgan both picked up late wickets, but the chase would prove to be a step too far.

After struggling against a tight bowling attack, Alex Starr and Cresswell (40) counter-attacked excellently in the middle overs to hint at a potential comeback for the Cricket Meadow men, but the dismissal of Starr for 28 proved the beginning of the end. New ball bowler Higgins’ 5-46 made the most damage as the home side fell well short in their first game in Shropshire League Sunday Division One, but continue to show promising signs through a number of talented youngsters who will undoubtedly prove cornerstones in the club’s future.