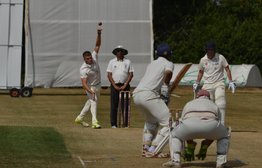 Back to winning ways as Quiney shines

Bridgnorth’s chance of claiming a first victory since early May were given a boost when the hosts chose to bat first on a green looking deck, and saw Dan Kearsley take a wicket with his first ball. But it was Quiney who produced the key spell of the day, removing dangermen Jayden Levitt and Alex Milton for single figures.

As wickets continued to tumble, Quiney (5-55) claimed his fifth scalp in his sixteenth over, and the hosts could have been dismissed for double figures but for a few missed chances. However, the skipper’s introduced himself to claim two late on, and leave his batsmen to chase a very gettable total.

Quiney then moved up to the top of the order to give Bridgnorth’s innings some early impetus, a gamble that paid off as he frustrated the home attack with a range of attacking shots. Dave Exall then worked hard to nullify the dangerous Gareth Williams, before JP Erasmus made the most of a move down the order to continue the attacking intent after Quiney’s dismissal for an eye-catching 46.

A few wickets fell late in the innings as the Cricket Meadow men stuttered towards their first win for nearly two months, but Erasmus kept his calm to finish unbeaten on 51.
“That was a much needed win,” said a delighted Whitney after the game. “The team spirit was back, we got the basics right and were rewarded. Hopefully we can take that confidence into next week and go on a roll like we have done in recent seasons.”

Bridgnorth’s second string were undone at home for the first time this season by table-toppers Pontesbury, after they won the toss and chose to bat first in favourable conditions.

Despite the heat, however, strike bowlers Cam Wallis and Toby Hughes got the hosts off to a great start to restrict the high-flying visitors early on. The good work with the ball continued with successful spells from Ross Hurdley (3-44) and Alex Hill (2-39), but the lower order cashed in as the Cricket Meadow men began to wilt under the hot sun. Alex Yarnley and Charlie Walker picked up a wicket apiece at the end, but not before Pontesbury had got themselves up to 197 off 45 overs.

Unfortunately a stiff chase for the home side never really got going, as wickets fell early and then continued to tumble at regular intervals. A combination of good bowling and some poor shot selection saw only Charlie Walker able to offer any genuine fight, top scoring with 24.

The thirds claimed their first win of the season, thanks in the main to an outstanding innings from opener Henry Roberts, who gave a masterclass of playing the anchor role on a tricky pitch.

After losing the toss on a wicket that would stay slow and very low all game, Bridgnorth struggled to get momentum in the early overs, not scoring a boundary until the 13th over. Guy Black used his experience to get the runs flowing in the middle overs, before a late flurry from Jake Millichamp and Will Buxton, but Roberts’ unbeaten 31 proved the key to a final total of 126-7 off 40 overs.

In response Buxton and skipper Alex Thomas bowled tight new-ball spells, with both claiming an early breakthrough. Black and Millichamp continued in the same vein by claiming two wickets apiece in the middle overs, as the Bridgnorth slowly tightened the screw and put the hosts under pressure. But Buxton (3-12) returned to claim two late wickets, before the skipper completed the win with two overs to go.

The fourths clinched their first win since their opening match of the season, thanks to excellent all-round performances from James White and Ben Cresswell.

After initially slipping to 60-4 having been asked to bat first, White (78) and Cresswell (52) combined superbly to put on a century partnership for the fifth wicket.

The final total of 226-9 off 40 overs appeared beyond reach when Huw Morgan (2-24) produced an excellent spell of bowling with the new ball to take to early wickets, but a combination of positive batting from the visitors and some loose bowling and fielding saw the runs continue to flow.

White (2-28) bowled a crucial tight set of eight overs in the middle to regain a little control, but Cresswell finished the game in emphatic style with four wickets for four runs in 20 deliveries.