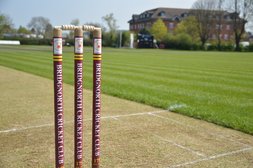 Bridgnorth five away after fourth in five weeks!

A fourth win in five weeks saw Bridgnorth surge to the brink of Birmingham League Division Two safety on Saturday, with an excellent team performance at Ombersley. The seconds once again struggled against a good Shifnal side at home, but the thirds clinched vital win in their target to stay in Shropshire League Division Four.

Skipper Sam Whitney was delighted as Bridgnorth pulled off a superb win in tricky conditions at Ombersley, putting safety just a few points away with four games remaining.

Despite losing out on an important toss and being asked to bat first, openers Ian Gregory and Dave Exall gave their side a solid platform by reaching 65 without loss, helped out by a wayward bowling attack. The good work continued as Ben Lees (28) joined Exall (53) for another crucial stand to push their team towards a strong first innings total.

A few late cameos pushed the Cricket Meadow men up to 193-8 off 50 overs, a strong total worth much more given the damp conditions.

In response, Bridgnorth’s bowlers kept things fairly tight early on to put the hosts on the back foot, although the hosts opening pair gradually accumulated the runs. But it was the introduction of spin that would change the game.

Sam Baugh picked up the first wicket, aided by a lucky catch from Ian Gregory, before JP Erasmus took a quick three scalps including the in-form Liam Gwynne to put the visitors in charge. Ombersley’s middle-order fought hard to get back in the game, but their hopes were ended as Whitney claimed the key wicket of Worcestershire batsman Josh Dell, followed by former Shropshire team-mate Ed Baylis.

The spin trio worked their magic to pick up three wickets apiece, with Quiney picking up a late breakthrough of his own, as the win was clinched with thirteen overs to spare.

The second string put in a battling performance at home on Saturday but were ultimately beaten by a strong Shifnal outfit.

The visitors won the toss and elected to bat first, but the previous day’s rain made for tricky conditions early on, which were exploited well by strike bowlers Cam Wallis (2-44) and Matt Bowler-Jones who shared three early wickets.

But the visitors strong batting line-up recovered well as the middle order cashed in with a trio of forties, and Euan Wentworth top-scoring with 54. Alex Yarnley (2-45) and Matt Martin also struck with the ball, but not before the Shifnal were able to reach a total that would prove too much.

The reply got off to a great start as opener Liam Kearsley struck an aggressive 34, but from 115-4 the hosts lower order struggles continued. Skipper Martin dug in to finish unbeaten on 39, but Bridgnorth sadly subsided to 138 all out, just missing out on claiming a losing draw.

A weakened third team produced an excellent all-round effort with bat and ball to overcome Calverhall, inching themselves closer to league safety.

After being asked to bat first on a green wicket affected by the previous day’s heavy rain, openers Henry Roberts and Guy Black made a solid start with the bat, but a mini-collapse saw the visitors back in the game. James White counter-attacked with some eye-catching blows over the legside, but it was a belligerent fifty from Ben Cresswell that got Bridgnorth up to a defendable total.

Cresswell then took an early wicket with the new ball, but the Calverhall top order took the aggressive route with the run chase, particularly through Andy Green’s 58. But the experience and guile of White and Black combined to dry up the runs as the pair, aided by some good fielding, ran through the middle order. White finished with a well-deserved 5-25, before the match was sealed with a solid catch in the deep by Cresswell off Black with eight overs to spare.