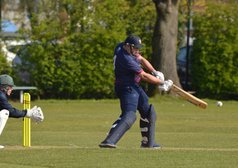 Dave Exall takes over the reigns at Cricket Meadow for 2022...

Former Herefordshire captain Dave Exall has taken over the reigns as captain at Cricket Meadow, after Sam Whitney decided to step down from the role he has held since 2017.

The highly-experienced allrounder has enjoyed a number of successful seasons over two stints at Cricket Meadow, and was delighted to take the chance to lead the team.

"I was honoured when Sam asked me if I'd be happy to take over as captain. He's done a fantastic job for the last five years, and will continue to be a key player for us. I love playing here, and there's a lot of ambition to take things to the next level in 2022."

The leadership group at Cricket Meadow have been busy over the off-season so far, and have made a number of big signings to further strengthen the senior squad.

"We've already got a lot of highly talented young players at Bridgnorth, and they've all stood up and shown what they can do over the last few years," continued Exall. "But we now want to step things up a notch and challenge ourselves to be even better, and get more consistent.

"The four lads coming to join us next summer are all ambitious and keen to show what they can do. They bring a wealth of experience in minor counties cricket, and all want to make another step up and show just how good they really are. Everyone in the squad will have the opportunity to produce something special, and our younger guys will be able to learn so much and further improve their game.

"It's a very exciting time for us at the club, and we all can't to get going next year!"