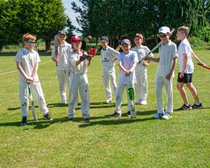 Bridgnorth U11s played their first match of the season on Sunday in blazing sunshine and a beautiful setting at Brewood Cricket Club. Although the team lost by 26 runs they put up a good fight against a team that had already played eleven matches this year!

There was some excellent bowling from two of the teams' younger players in Joe Bishell and Marcus Thompson, with Joe taking two wickets and Marcus bowling two very tight overs of leg spin. Seb Whitmore took a wicket with his first ever delivery when Eddie Sykes took at good low catch at mid-off. Some fine fielding from Roman Seabright and tidy keeping by Max Ward meant that Bridgnorth were in with a shout.

There was some good batting from Noah Bishell and Eddie Sykes and some big hitting at the end by Freddie Ward who hit a magnificent six, but in the end they just lost a few too many wickets.

A really encouraging start to the season. The boys played with great sportsmanship and were a credit to Bridgnorth Cricket Club!