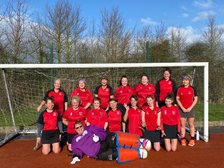 Facing their fellow training partners for a league game, the ladies 3’s started the match with enthusiasm and determination. Getting into their stride, Hannah and Ellie attacked down the left and Tracey and Morgan attacked down the right. Talia and Tara worked tirelessly in the centre of the pitch and the team were rewarded with a short corner. Tracey stuck it sweetly and the 3’s were ahead as it hit the backboard with a satisfying thud. This was obviously not in the script for the 2’s and it took hard work and speed to finally find the goal and draw level. The 3’s were undeterred and finished the first half on a high with another short corner, this time unable to score.
The second half saw the 2’s step up the pressure on the 3’s defence of Bridget, Linda, Lydia, Katy and Sam with a well struck short corner, and a tap in at the post and a couple of individual strikes, giving a flattering final score line of 5-1 in the 2’s favour. As only their second match and with several changes to the team, the 3’s produced an inspiring performance of which they can all be very proud.
MOTM was Tracey Gue.
Share via
FacebookTwitter
https://www.bridgwaterhc.co.uk
Recent news