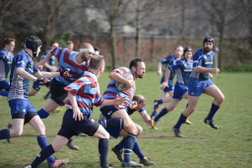 For the return fixture after our inaugural game against the Steelers six weeks ago, we were all motivated to ensure that we got on the scoresheet this time. This we accomplished.

On a balmy afternoon and on a dusty, hard pitch, we lined up with fire in our bellies, our recent training reinforced by coach Iggy. But from our kick-off, the Steelers caught the ball superbly and ran along their right wing and scored a try. Nothing we could do about it. We had hardly blinked.

In the huddle while the (failed) conversion took place, Captain Byron’s words: heads up, reset and move on. From their kick-off, the ball was caught and Russell barrelled through the field. Just one more pass would have resulted in a try for the Serpents only about 10m out but it was not to be.

Another kick-off, ball caught, this time Phil ended up with some space to go forward and again, about 10m from the Steelers’ touchline. While it ultimately resulted in no try, the support and structure was there and organised. Dan’s kicking was exemplary throughout, causing all sorts of trouble for our opponents.

Some of the Steelers’ backs were skilful runners, and it took all of our resources and skills to stop them from scoring further. One try was stopped just inches from the line: that was a triumph! Another stopped by the touchline. Another stopped by a spilt pass just before the corner had been reached. When one defender missed a tackle, other Serpents were on hand to cover. We were alert and focused, well within this match.

Half-time, 5-0 down. Water bottles emptied rapidly. Some substitutions and position switches made. Coach Iggy remained positive: We are killing them in the scrum. We can win this!

Time and again, Dan kicked accurately to the touchline or upfield, making significant gains. The Serpents were continuously chasing the ball, trying to harry their opponents into mistakes in their own 22. But some of the backs were too evasive and made distance into our half and unfortunately much of the second half territory was here.

From a scrum near our touchline, a try was scored from nowhere by the Steelers. Again, heads up, fighting spirit intact. Some good tackles were made during a lengthy period in defending our line, but the wall was breached for a final time. 15-0.

And then, from a ruck formed by Jon just over the halfway line, a Stevie pass went to Phil, who caught the ball to the right of the pitch and ran and ran and didn’t need the support on hand to score the Serpents’ first ever try! It got even better: from a 45 degree angle, Dan scored the first conversion of the match! 15-7 to the Steelers.

A few injuries started mounting up thereafter and in a melee 2 minutes from the end, Phil was shown a red card for kicking a player on the ground. From hero to dick of the day in a flash!

Nevertheless, there are a huge amount of positives to take from only our second match, 4 players of whom were taking part for the first time (Dan’s kicking deservedly won him MOTM). In particular, our scrum was superb, with strength all around, especially from our props, Shaun, Byron and Mark. Our training on how to move as one unit was put into practice for the first time and it worked brilliantly, though we need to disengage quicker. Overall, there was more calmness under pressure which allowed some set plays to be executed well in places. We have moved on massively from our first match and while there is still so much to learn, we will get even better. Watch out Birmingham!