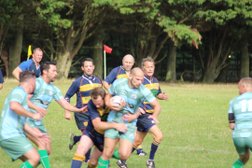 Our first match against a fellow Sussex RFU side.

A match against a team which is part of one of Sussex's premier rugby clubs was always going to be tough, but it will be representative of the sides we will face this season and as such must be treated as a useful sighter: to learn where we are, who we are and what standard we need to aspire to.

This was our sixth match in our short existence, on a dry but gusty afternoon in front of an eager crowd. Aware of this, Byron didn't mince his words in the pre-match talk. Are we here for the right reasons? Do we want to represent the Sea Serpents? Are our heads screwed on properly, with the will to win?

Barely five minutes had elapsed when the first try from Worthing was scored, via their left wing. A second and a third followed rapidly via the same channel. It really was now about damage limitation for us. Time to show our character, time to show what we are capable of.

Sadly, it didn't happen. More tries followed, evening up the scorers through the opposite wing. Again and again in the team huddles, Byron and Paul T had to correct our mistakes retrospectively, but we were up against a juggernaut. And it didn't let up in the second half either, with further tries from all parts of the field and many triumphant Worthing players on the scoresheet. Final tally, 70-0: Ouch. But the scoreboard didn't lie.

In short, the Worthing players (mainly veterans) did all the basics right: Despite their occasional lack of stamina, there was a rhythm to their play, the ball was recycled with deftness and skill, instructions were urgent yet controlled. They WANTED this match, from start to finish. They had a burning desire to own the scrums and lineouts each time, and they competed for every ball they could.

By contrast, our inexperience was plain to see: too much timidity in taking the ball forward and tackling; disorganised defence, leaving wide open gaps; limited or sometimes non-existent support for the ball carriers in attack; and poor communication, both in lack of commands and obeyance. The tale of the tape was that we had only one chance near their touchline, which we chose to kick for 3 points, but unfortunately this was missed by Dan DR (note for next time: for God's sake, someone please organise his kicking tee on cue, as he gets very cross if he has to use another one!)

Rugby isn't meant to be easy. A game like this will reveal the true character in all of us. How will we react individually to a game like this? And as a team? Will we pick ourselves up, devote ourselves to training and learn how to improve bit by bit? Will each match become enjoyable, where we are suitably enough skilled to believe we can do anything and take on anybody? One day, this will happen. But for now, we live through the hard times to inspire us not to be quite this bad again!

As always, there were individual passages of play that should give us hope for the future: some lovely darting runs from Chris R, confidence in tackling from Phil and Chris H and good distribution from Dan M. As the second half wore on, the debutants emerged with credit: Chris Y, Adam, Eric, and a particularly silken-footed Ryan. Even more encouraging was the attendance of new players in the crowd, willing to watch and learn, and have fun.

Detailed points to learn from:

1) Instruct and direct your nearest team-mates at the time, not after the damage is done. Crucially, listen and take heed.
2) After conceding a try, and dealing with the inevitable bollocking behind the touchline, keep your heads up and jog back to the half-way line to let your opponents know we've still got energy and are not about to throw in the towel.
3) When rucks are formed, we cannot have 0 players in support and nor can we have 4 or 5. Get the numbers right all the time, by being organised.

Man of the Match: Chris R in his debut full-back role, hooking now a distant memory.

Dick of the Day: Me, taking over hooking duties, managing to hit the touchline flag throwing the ball in to a lineout, which then dribbled nicely to Worthing's scrum-half accompanied by a loud expletive. At least that raised a laugh from everyone present, but it rather summed up a poor day at the office for the team.

Runner-up: Byron, for making the team blush by threatening to do unspeakable things to us if we didn't improve.

Onwards and upwards though!