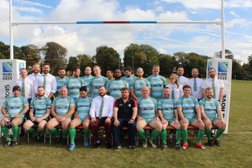 Harsh lessons, but with a positive outlook for the future.

First of all, forget the score. Following our last match, we had an invaluable 4 week period to acclimatise to the rigours of so-called-friendly-but-competitive-really rugby, which also coincided with the welcome appointment of our new coach, Tom, last week. It will be interesting to see how this new perspective on the team will unfold, but there was a marked improvement in attitude and execution against St Leonards Cinque Ports. To be clear, this was their first team: players of size, speed and more than 10 years' experience.

For us, the golden hour before the match was spent on a photoshoot in burning sunshine, latecomers not tolerated and Misha in his element, combining warming up drills with handling skills, including a quick-fire game of touch rugby. As the crowd numbers increased, from our regular supporters to injured and new players alike, we finished with a tackle-bag session just before kick-off. That was needed. Especially as the referee had just before made it crystal clear he would not tolerate any profanities. Tough one that…

This intensity worked through the initial phases of play, even if it was punctured by a blink-and-you-missed-it try from St Leonards within a couple of minutes (albeit the conversion was missed). We quickly made good territory and won a penalty within striking distance, which Dan kicked. 3-5 down after a few minutes, it was nicely competitive.

But then it unravelled. Tries scored against us in quick succession out wide counteracted our territorial gains which evaporated in a matter of seconds. Time and again, we had to retreat behind the posts for our "briefings" as we will call them for this match, some being barely a couple of minutes apart. St Leonards knocked seven bells out of us in the centre of the pitch, and tore apart the gaps that opened up on the wings. 3-44 down at half-time, when the bright sun turned to gentle rain. By now under grey clouds, tries rained down on the Serpents, with added conversions, and the final score ended up 3-104.

Changes made either side of half-time were due to a number of injuries, whether positional or tactical, e.g. Ashley (b****cks), Dan (nose), Demetrius (knee) and Chris H (hand) – but it felt like a luxury to have 5 substitutes ready and willing, including sparkling debuts from Zack, Billiejoe and Tom B. Particular praise goes to Ted who battled hard in the tackle and ran his socks off with the ball. Man of the match (probably the first of many!): Ryan. Dick of the day: Byron, for being clueless about the concept of drop kicks.

Overall, there were a number of things that the team did well and not so well. It would be fair to say that probably all the players managed a few good tackles (even some double ones), but plenty were missed too. Defensive lines were formed well some of the time, but not always (guards, anyone?) Line speed from defence was good occasionally but poor at others: the former allowed us to put pressure on the opposition in their territory, meaning gains could be reinforced; whereas the latter meant attacks against us with momentum and interest, usually leading to tries conceded. All these skills are the basic building-blocks of rugby and therefore we need to focus relentlessly on improving these in the immediate future.

Positives:
- We did not allow our heads to drop: by jogging back to the half-way line after each try was scored, we sent a clear message to the opposition that we would not give up and showed guts throughout (see their Twitter messages!)
- Better intensity
- Greater willingness to take the ball on and tackle (some of which resulted in injuries, but heroic ones nonetheless!)
- More confidence
- Accurate kicking into touch and space from Dan and Chris H.

Negatives:
- Our scrum was weaker than theirs.
- Too much honeypotting around the ball, meaning some players not doing anything useful at that moment (and therefore creating inbalances between players and formations further out).
- Not enough listening to instructions/commands (particularly to drift the defence out wider), resulting in too many gaps being created in the back line and a shattering of the crucial 1 on 1 man-marking system.

Other random points:
- It is worth challenging the referee (via the Captain of course): we stopped him awarding a try and nearly another by casting doubt over the grounding of the ball.
- Be honest: at what point did we take off the blinkers and realise what their game strategy was? When their exchanged player told us with 10 minutes to go, or earlier? It was simple, effective and exactly what Worthing did to us in the previous match, i.e. drive up through the centre of the field, take out as many players as possible, and quickly switch wide with rapid passing, where the wingers finished us off.

To summarise though, no one should be discouraged by this match. The scoreboard is cruel, but it reflects our inexperience and gulf between us and St Leonards. If anyone doubts themselves or our team, remember this: the respect shown to us by our opponents at the end was forged by them being in the same position some years earlier. They were like us once, but they have got where they are by knuckling down and toughening up. It's a change of mindset and we will do the same, only time will tell. Similarly, think of the respect that we are gaining from the Hove players/coaches and club (who allowed us to play our first home match of the season on Pitch No. 1, which was useful viewing for supporters from inside the clubhouse during the rain!) For all of this, we have a lot to be proud about and we are making many friends in the wider community. But be under no illusions that some hard work lies ahead in training!

(I'd like to add thanks to the Manager of St Leonards for offering us a swap of players to even the sides, and for pointing out that hey've been going 10 years, had lost their first matches 130-0 etc and had to play 22 matches before their first win. Also for their kind comments on twitter after the match.