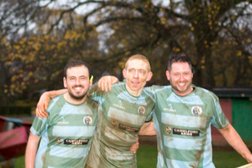 Not the wettest match ...

Our first competitive game a year after our first training session was another milestone in the Serpents' existence: a quarter-final home match of the Sussex Salver cup against Eastbourne 3rds. It also kick-started a run of 5 consecutive weekend matches to round off the year on an increasingly overcast day that was later to whip up into Storm Angus.

Despite some last-minute pull-outs, most of the remaining players turned up for an early warm up to settle us into the match – while Byron disappeared to fetch his forgotten boots. Back in the changing room, coach Tom gave us some last minute advice, including tolerating mistakes from our team-mates, as we would all be guaranteed to make them at some point. Eastbourne themselves arrived a little late, so the kick-off was delayed by 10 minutes, plus 2 more waiting for Eric to make his grinning arrival on the wing. Two contenders for DOTD already…

The kick-off from Eastbourne was the only one they would do. We lost possession cheaply and conceded our usual try within the blink of an eye. It was clear after 10 minutes (if that) that there would only be one winner of this contest as two further tries and a conversion were scored. Two quick injuries to Billie-Joe and Sam H used up our substitutes far too soon, Damian in the front row and Sam G making his full match debut in a different position to that which he had prepared for: kudos!

BUT as the drizzle began, we found some rhythm and came to life. We started to put some moves together and recycled the ball multiple times. We tried new things and experimented with our formations. Although 4 more tries were conceded in this half (not to mention some penalties), we were not afraid to 'go for it', even if we were somewhat ignorant of the rules – exactly what coach Tom had foreseen. We saved a try through pressure (leading to a dropped ball) and made some territorial gains not just as individuals but for the first time as a team. Best of all was a crunching tackle by Ryan that made Eastbourne sit up and take notice that we were not going to roll over. 0-37 at half-time.

Then came the deluge. Mud, mud, glorious mud – who doesn't like playing rugby in these conditions? It's what we Serpents were bred for! And it seems to be a weather pattern every time we have played in Hove so far… All the supporters retreated to the warmth of the clubhouse, leaving only resting player Mickey as our water-carrier (bravely ruining his turquoise Mohican in the process).

While we had no answer to the power and speed of Eastbourne's no. 18 in particular, our 5-man line-outs were consistently strong, and our scrums competed well most of the time (credit to new hooker Chris Y for loudly asserting his authority in both, reviving the ghost of the late Ian Paisley). These gave us a decent platform to launch our attacking line whether that was the back line or forwards – even if our execution wasn't always the best. Eastbourne certainly didn't have things all their own way: the slippery conditions made running and handling difficult, but they were steady and found their way over our try-line on more occasions. Until … they unexpectedly didn't … when Ryan chased three-quarters the length of the field to take down a certain try scorer, whose support was just slow enough to allow Chris Y to hold him up.

Credit also to Paul T for staying on the field with a twinged shoulder and for Dan DR for returning after his second consecutive knock to the face (realising that we had played with 14 men for 20 minutes). And some light relief from Eric near the end, somehow forgetting his compass and flinging the ball forward by a huge distance … when he had possession.

With 8 minutes to go, Eastbourne – via the ref, who had showed admirable leniency throughout – offered to cut the match short. But we were in absolutely no mood to do that and puffed out our chests and carried on. It was touching that they applauded us after their penultimate try for our positive, never-say-die attitude. Unfortunately we conceded one last try at the death, making the final score 0-76.

So Eastbourne progress to the semi-finals of the cup and we wish them good luck. For us, we meet our original rivals, the Steelers 4ths, on Saturday where we should perhaps fancy our chances.

This was clearly the best match we have played. It was encouraging that good individual performances translated into some good team play at times – despite being short of personnel and that only 5 players had played more than 2 matches in their position. We put effort into this match and generated intensity levels we have not done previously. Real progress has therefore been made and we will build upon this in the coming weeks … as fitness, confidence and knowledge improves, and a core of players train consistently and regularly with each other.

Congratulations to Sam G, Sam H and Josh for their debuts.

Match report amended by the following from the Sussex RFU:

On Saturday, Eastbourne RFC cancelled their 2nd XV match in the Canterbury League.

Under Merit Table Reg 4i, (which also applies to Knockout matches), any lower XV playing on the same day, is deemed to have lost their match, to prevent the 'strengthening' of lower XV's.

This means that you are now in the semi final and will play Hasting 3 on 18th March.