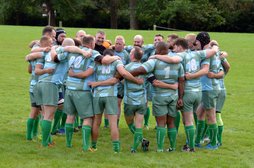 A start to our careers in the Sussex League

On a cold, dark evening in February, the players met in The Marlborough and agreed – albeit with a little persuasion – to enter the Sussex league this season. The team has strengthened in these subsequent months, new players attracted by the progress the club has made in such a short space of time and its inclusive ethos.

So less than 2 years since the club was formed, we made history by playing our first league match. Six players remained from the 16 who played in the club's inaugural game in February 2016 and wallowed in the luxury of having the biggest matchday squad we've ever had, 21. We were even on the main pitch at Hove Rec, something we might have to get used to!

The Coach called a team meeting beforehand, which the majority of players were late for. The Chairman looked intense. The Coach was nervous. Some players too. The speeches concentrated on pride in ourselves and as a team, then we were given some collective and individual goals to achieve during the match. More pressure to add to the scrum around allocating the kit…

Once outside we were led into our now familiar warm-up routine, which went some way to ease the feeling of helplessness that can afflict players before a game. Supporters trickled into the ground, eager with anticipation. The sky looked threatening. Would it rain? Wouldn't it? There had been plenty in the preceding days, making great conditions underfoot, even on a sandy pitch. After the Captain and Kev had completed their speeches to hand over to the Vice-Captain, Paul T, rain started to fall.

Kick-off was a relief. Ready … everyone together. Such hope, winning the ball, then losing it. Watching as the first try scored against us within 5 minutes. And a good conversion too. Another try down the same left flank a few minutes later. And again.

But then … a moment of inspiration from Nick at full-back, taking the game by the scruff of the neck, wending his way from deep in our 22 right up the centre of the pitch. Should've been toppled but wasn't. Great collaboration from Paul N, barrelling his way even further towards the tryline. Subsequent support on his right from me, ready to score nearer to the posts. But no, took the tackle and instead offloaded left to a running Dan DR on the wing, gloriously touching down the ball for our first try of the season! Conversion missed though, a tricky one for Dan.

Stung by that, Heathfield scored again and took Nick out for good measure with a bang to the head on the tryline. Finally we settled down, more controlled in our play and making territory even if we weren't near scoring. There was even a show-off move between Dan H and Kev attempting a fanciful behind-the-back pass which worked well in training but not today. So, a period of calm for the supporters but this was a time where we believed we could reel our opponents back in. Heartbreakingly though, Heathfield twisted the knife: 3 tries and 2 conversions in 7 breathtaking minutes. It was cruel, our gas had run out at a crucial point before the break.

Half-time: 5-43 down and Nick being polite enough to puke up at the side of the pitch away from the supporters. Tom keeping tabs on our targets during the half and urging us to keep our heads and be strong.

Something had gone wrong with our set piece at the scrum, so Captain Byron sought clarification from the ref over the rules (new for this season). The ref acknowledged that Heathfield had been close to legality throughout the half but played the rules better than we did. Game on! Our commitment to tackling increased, forwards laying their bodies on the line and Ryan disposing of opponents at will when they thought they were through…

It took Heathfield 15 minutes to score a try in this half, so improved was our defence. Not long after, we won a scrum. From the base, I held off the pass for a couple of seconds, drew in 2 defenders and Kev was able to fly through the gap, twinkletoes dancing left, right, left again and finally a sprint between the posts. Our second try! One that he knew he'd have to convert … and did!

By now, Heathfield wanted to press forward, rather than waiting for our errors. We were pegged back in our half for too long, unable to get out as the lactic acid kicked in to all of us. Two more tries conceded, including a particularly bad one crossing from left to right as our drift defence was all over the place. Patience was finally lost by the ref as Phil was yellow-carded for an admittedly gentle but nevertheless high tackle following a warning to the whole team. Then the rain poured down, the whistle blew, the players embraced and a rapid photo was taken before heading indoors.

Another achievement notched up. Relief to get the first game out of the way, private satisfaction in implementing some set goals and joy in being part of a fantastic team. Another bottle of (pretty good) port downed in the post-match changing room; the Chairman intimating that there'd be no more until we won. He's proud of us really…

MOTM (Back): Nick – on his debut no less, and with a stonking hangover, some great runs and composure, until downed defending our touchline and out with concussion.