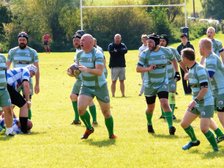 After an unfortunate cancellation of Thursday's training due to a bug going around the team and the inevitable withdrawal of a key player in the front row, we headed to our first away league game in Lewes.

Conditions were perfect and in such a beautiful setting – clear blue skies, sunny and hot. With the soft pitch adjacent to a charmingly rustic 3-storey clubhouse-cum-cricket pavilion, the temptation would be to see how much damage a ball could do to it or indeed to the cars parked in front. Luckily none as it turned out.

With an ex-Lewes player in our ranks, some inside information was shared around during the warm-up. Spirits were high, we were up for a good game. Our supporters, replete with offspring, gathered around the playground area with their usual hope and expectation.

We received the kick off, though not exactly to plan as it went straight out beyond the touchline. So we chose a scrum which we secured and launched an attack from. But having made some ground, it fizzled out and the resultant penalty kick to touch took us back in our half. From the lineout, Lewes secured another penalty, kicked to touch, won a scrum and finally galloped across the pitch to score in the opposite corner. At least we prevented a conversion but that was too quick for comfort.

We did manage to win the next scrum against the head, our forwards pushing valiantly against some big units in the Lewes team. Our possession didn't last long though, and the pendulum swung between Lewes running crafty attacking lines and us with individual moments of inspiration: Dave P on his Serpent debut (having joined training only the week before) running from full-back forwards then sideways until being smashed. But all within our 22 and inevitably we conceded another try due to the pressure and organisation that Lewes cast on us. In the corner again, so another failed conversion.

Another break followed from Dave P (with support) to go deep in the Lewes half until bundled into touch, and after a couple of phases of attacking play, we were snaffled in a ruck and as quick as a flash Lewes had run from their 22 to score another try via a fantastic kick and chase.

It was now all hands to the pump to repel the attacking waves: our tackling has certainly improved, even though Richard was penalised for a shoulder charge (not wrapping his arms around the ball-carrier). A kick to touch, an overthrown line-out, a fumble from us, quick play from out the scrum, runners doing their stuff, another try near the left hand corner. No conversion.

Kev punted a great ball into touch, securing us an attacking lineout close to the Lewes tryline. But we were just not able to win the ball in this set piece, the Lewes team were so strong in this respect. Nonetheless this was a good period for us, sticking to the Lewes half and Ryan bursting through a gap in his usual speedy manner. Lineouts here, there, everywhere, Lewes won them all. And then from nothing, a try in the left hand corner from an overhead kick, we didn't stand a chance. One more repeated phase of attacking play from Lewes, a cheeky overhead pass to the centre and a try - for once - close to the posts. Finally a conversion. Surely the two are linked…

Before half-time, we started to exert some pressure of our own within the Lewes 22: a scrum against the head, Dave A running close to the tryline, Dan H barrelling even closer, ball spread wide, strike runners being stopped in their tracks, recycling of the ball successfully and quickly, ultimately leading to Ryan lunging forward with the ball and stretching to the tryline. But the ref ruled against him, a double movement (as opposed to momentum). Correct but cruel.

Urged to keep pressing forward by Coach and Captain, we went into the second half with a lot of positivity, believing that our fitness would tell. But this would be a false dawn, an immediate Lewes attack with players flinging the ball around wildly culminated in a pretty decent try straight away. Another followed a few minutes later.

We then had the lion's share of possession for a while resulting from a series of penalties initiated by a high tackle on Ryan. Kev kicked well, Dave P ran a great line but unbelievably Lewes stole the ball from nothing and scored – totally against the run of play at that point.

More territorial gain from us was undone by losses at the lineout: we were a bit shell-shocked at how Lewes were able to best us here. Then losing the ball in a tackle, we surrendered territory and the fast running backs scored down the middle. Immediately after, another try was scored following a line break by a prop, no less. Then from a lineout, another try scored in spite of a great defensive effort by Zack, being broken in the process.

A drift defence failed to prevent a further try and with the last play of the match, a final try for the hosts.

Overall, Lewes put out an experienced, lively and well-drilled team that was simply too much for us and will no doubt sail high in the league. In particular, their lineout was an unqualified success. But we had heart: we didn't give up and we tried our best; we were able to smile and be proud of our performance. Each player can take something positive away from the match: we learn from our losses, we become stronger for them and we will work out as a team how we can get better.

MOTM Forward: Chris H – nice debut at 5, now officially the most versatile member of the team (which we knew…)

MOTM Back: Ryan – his usual threat in attack, his usual relentless and merciless downing of the opposition in defence (can still hear their screams of disappointment…)

Debut: Dave P (took his dirty pint after some persuasion…)

Next game: Following Newick's cancellation, a Home friendly with our parent club, Hove 3, k-o 3pm, Saturday 23rd September – part of their anniversary celebrations and the day after our own fundraising event.