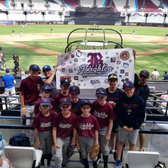 What a magical 10 days of baseball! The big event was of course the extraordinary MLB London Series that took place on June 29-30 between the New York Yankees and the Boston Red Sox. Players, parents, and coaches from Brighton took full advantage of the opportunity to go to London Stadium to watch the stars taking batting practice, and then returned for those two incredible run-fests over the weekend.

And a few of our kids were lucky enough to be invited to attend a baseball clinic run in London by some true Yankees legends -- Mariano Rivera, Alex Rodriguez, Nick Swisher, Andy Pettite, Hideki Matsui, Carlos Beltran, and Mr October himself, Reggie Jackson! Several of our U13 stars also got to take part in a tournament for the first ever MLB Cup in London.

Just to make sure we didn't forget the roots of baseball, some of Brighton's players took part in a GB Baseball exhibition game in Walton-on-Thames, to mark the first ever recorded game of baseball played there in 1749.

Baseball is indeed coming home, and Brighton is a big part of it!

And coming soon... a report on the fortunes of Brighton players representing their country in international tournaments this year!