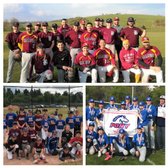 Players from both the youth and adult programs have been doing an amazing job of representing Brighton so far in 2019, both in regular season games and in national and international tournaments. Our two adult teams, the single-A Brighton Jets and the double-A Brighton Brewers currently have a combined total of 8 wins and 10 losses, facing some tough opposition with impressive resilience. Four games for the teams this weekend will give us the opportunity to turn things around and head into the rest of the season with a winning record!

Meanwhile, the youth players have done themselves proud with some fantastic games against teams from Guildford, London, Herts, and even further afield. Last weekend, players from our U17, U13, and U11 categories competed in the UK Little League national tournament and emerged with some great results. All age groups notched up some fantastic wins against clubs from London and the East of England, and there was a tournament championship for the U17s playing in the combined team with teammates from various clubs across London and the southeast.

Brighton youth players are also taking part in high-profile international tournaments this year. Most notably, Brighton's very own star pitcher, Django Hendrickson, and coach Jared Hendrickson were a key part of the London Archers all-stars team that won the PONY 14U European Championships and are next headed to the US for the PONY World Series in August!! And various other players are competing for Team GB at U12, U15, and U18 levels, taking part in tournaments in the Czech Republic, Germany, and Sweden later this summer.

With the MLB London Series -- featuring the New York Yankees and Boston Red Sox -- around the corner, the 2019 season is fast turning into a classic. Come along and be part of the action --send us a message if you're interested in following Brighton's fortunes, or becoming part of the Brighton Baseball story yourself!