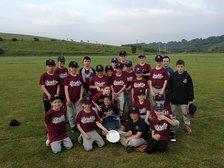 Brighton youth players ready for the next challenge

Back from Prague with the U10 Blue Cup. Next stop, Team GB in the European Championships!

This is the second trophy in a row for Team UK, who returned from Prague last year with the U10 Yellow Cup. That team featured Brighton players Euan and Ryan Gulliver, Ruby Hilland, Harry Walsh-Black, and Sam Yates. The last four of those aged out of the U10 competition this year, but join another young star from Brighton, Louis Dean, as they head out to another European event at the end of this month to compete for Team GB in the U12 European Championships in Hungary.