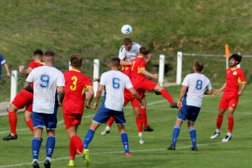 On yet another warm and sunny day at the Meadow these two sides met and in truth probably cancelled each other out throughout the first half. Things livened up a bit on the 28th minute when Nick Jones had to leap smartly into action from a rocket of a shot from RWB which he tips over the bar. Two minutes later RWB came close again in trying to lob Nick but its too high and over the bar. Unsurprisingly this pressure told when on 43 minutes a free kick comes in at the back post and is knocked in by RWB's Alfie Presley.
Half time arrived with Royal Wootton Bassett a goal to the good.
The second half followed a similar pattern to the first but the Whites, urged on by the tireless Jake Parrott, pressed strongly and were rewarded when on 67 minutes Jack Bartman heads in.
Shortly after this Ollie Pitt and Dave Woodfield were subbed by Oli Barnes and Dan Hill then a few minutes later Jonty Welch replaced Ben Snook. Lilywhites pressure was beginning to tell at this stage requiring the RWB keeper to be on his mettle with a couple of smart saves from the Lillywhite forwards late on. Pictures of this and other phases in the match album courtesy of Peter Barnes.
And so it ended all square which on balance was probably a fair result.
Match Report by Scotty Boulton and Keith Phillips.
Share via
FacebookTwitter
https://www.pitchero.com/clubs
Recent news