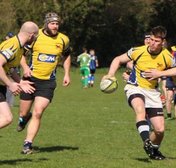 Like any rugby club, we’re as good as family to each other. Bodies on the line and socialise in equal measure.

We want to share how various club members found BAC and more importantly why they stayed!

I have played rugby all over England, for a number of clubs and at different levels.

I received a call from Casper and Yappy who I used to play rugby with at University asking me to come along. I was a little hesitant as I had pretty much retired and didn’t want to arrive at a new club, where in my experience, there can be politics regarding selection. I was pleasantly surprised to find a great group of lads of all ages. Some would only be there for the season due to work, some have been there since rugby was invented. There are some fantastic characters and a genuine love of the game which runs through the club. It doesn’t matter about your ability, age or the time you will be about to play. Players and coaches made the effort to integrate me straight into the set-up.
After a short period at BAC, I was helping out with fitness training which was enjoyable and beneficial to the team on the field.  

In summary, it’s a great club, which I highly recommend. Anyone who wants to play competitive rugby without the politics and with good camaraderie should make contact. You will not be disappointed.