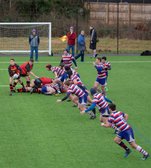 Back to the forwards not running anywhere.

Back to the backs knocking it on.

Back to Ross having an incredible game yet being stitched up in the bar afterwards.

Back to BAC RUGBY!

We started our 2019/2020 campaign with a preseason game at the BAWA against Bristol Telephones who had some players that made even Damo look like he was in shape. After a short sharp warm up and a classic Wilton emotional speech we were ready and underway. We started strong with decent forwards play and some good running from the back (when Chard actually caught the ball, which was rare). Our defense was strong against endless forward crash balls and pick-and-go’s with even reports of Podge and Hugo of both making a tackle however I didn’t see this so it can’t be confirmed. Our efforts paid off with Welly & Nath both going over the whitewash in the first quarter and Sheps sticking to the form book and only managing a 50% conversion accuracy.

The positives of the first quarter led to a bit of over confidence and excitement in the second. The phase play broke down and poor decisions were seen across the park; most notably Sheps after an inspirational blind side pick from the illustrious scrumhalf off the back of a scrum, decided that a 2-on-1 was beyond his abilities and put boot to ball. Another inspirational move was started by the world-class scrumhalf as he faked a box kick and made a blistering run down the blindside. An uncharacteristic mistake meant that he decided to kick instead of using his brute strength and pure speed to beat the last man which cut the beautiful play short. The first half came to a close with BAC ahead 13-0 with the visitors embarrassed by their lack of scrummaging ability and claiming they had to go to uncontested scrums.

The third quarter saw Telephones continue to show the attacking creativity of an angry sheep, just blindly running head first into the defensive line. This strategy did however pay off even with the two newbies of Matt & Dan putting life and limb on the line to make tackles, Telephones produced a try putting them firmly back in to the game. The final quarter team talk was led by another impassioned speech by Mr. Wilton which fired the team back up again to make sure this game was put to bed.

The final quarter started much stronger with the phase play working well and again more unbelievable vision, flair and excellences by the number 9, taking a quick tap 10 meters from his own line leading to an attack ending up on the opposition 22. In this quarter, the uncontested scrum was the scene of a high and a low; the backs managed to use this base as a launch pad for a powerful crash line from Robbie to go over under the posts and put BAC in control of the game (with notable mention of the 9 in this play, drawing in the opposition 7 before off-loading to 10 to allow Robbie the space to make his run – just another example of this outstanding performance by the scrumhalf) But the low point of the quarter was managing to lose an uncontested scrum with the responsibility undoubtedly falling on Jut at hooker as he believed half volleying the ball forward would be a good decision.

This BAC win wasn’t the prettiest but a win none the less! It was an important game to get our heads back into the rugby mindset and we will take what we have learnt from the game into the rest of the season.

MOTM - Frans Smit (Should have been Ross)

DOTD - Ross Gardner (Should have been Jut)

Seeing as I will be away cycling around sunny Majorca missing the next game, the item to bring next week is a bike helmet so you can feel more connected to your talisman of a scrumhalf.

Much love from your favorite small person,