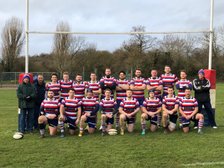 BAC Travelled up to Cheltenham for the last game of pre-season hoping all the beasting over the last couple of months would click and a complete performance would set a marker for the season to come.
Unusually for a friendly over 20minutes from home we actually travelled with subs.
The build up to the game went as most weeks do, some good stuff, some not so good, lots of shouting and swearing but overall a decent warmup.
The game started as we meant to go on good clean catch, good recycling of the ball by the forwards, giving the backs a great platform to work from.
As per any game in Gloucester 2 the ref will usually get a mention, Saturday was however a new level of reffing and by a new level, I mean a level below the usual.
It only took about 5 minutes for the first call, Furze took a very slight knock to the head, everyone unsure how it happened, was it a sneaky punch from the opposition? Was it a clash of heads? No-one knew until ‘Duncan you stupid cunt’ seemed to be the only words that came from furze.
As he had stayed down, with a ‘head injury’ that was the end of the game for him, no HIA’s, no magic sponge treatment, no 10 minute break and no gentle persuasion from tony would change the refs mind, the clubs angriest ginger had to go . With no other options Flynn stepped into centre with the 2nd angriest ginger, unsurprisingly nothing went through the centres.

Despite the early shuffling of players BAC were on top and it stayed that way for pretty much the whole game, forwards really putting themselves about, runners off 9 making gains and the ball being recycled well. New guys Greg and Robin/ Olivier (not sure what his real name is) fitting in well.
With a good platform to work with the backs kicked well into the corners and kept Cheltenham on the back foot. Some powerful drives and all around great organisation by the 10 BAC got themselves into a good lead 19-0 (I think) at half time.
Cheltenham did get themselves back into the game with a break on the wing and some good footwork the 10 found the try line.
With the kicking going well, BAC’s 10 in middle of the pitch spotted a small opportunity behind the defensive line and as it was a friendly game decided to try something different and tried the short chip and chase. Unfortunately the opposite 10 found his NBA spirit leapt high, so high in fact the ball went straight into his arms and I think he finished it off.
I didn’t want to mention the ref too much but with (I think) 8 yellow cards between both teams during the game it has to be. Any arms around shoulder height in any situation being harshly punished with a yellow and no hands offs to the head apparently also illegal. This didn’t improve the mood of the 2nd angriest ginger at the club who had ‘taken holiday’ and is ‘losing money’ for the pleasure.
It would have in the past affected us in the way we played the game but we stuck to our game plan and continued to push hard for the next score.
So of course the next score was Cheltenham’s,
BAC attacking on oppositions 5 metre, nice work from the forwards set the platform, dodgy pass from 9 (yeah I am being that guy blaming someone else, sorry Jim), 10 under pressure tried the hero pass, intercepted again!, 15 ran it home for them. From Hero to zero in 10 minutes.

Cheltenham into the lead. This didn’t faze BAC, we knew it was just 2 individual errors that was the cause. (Hence why I’m writing the report!) We just got back to our game plan and played in the correct places. In the end a couple of decent backs moves finished the game off. Defensively we were good and quite probably could have scored a few more.

Final score- Cheltenham CC 21-36 BAC
MOM- Damo
DOD- Me (Sheps)
Item for Saturday - a Toy Boat (if you can drink out of it even better, that’ll come in handy on the social)