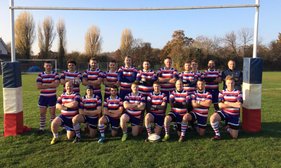 BAC travelled to St Brendans for the final game of the season hoping to end the season on a high as the only team to do the double over St Brendans. The BAC line up took on a different feel due to injuries and availability but despite this it was a strong team.

BAC started well but the score line did not reflect that in the first 20 mins, with St Brendans quickly scoring 3 tries and BAC failing to capitalise on their chances. Unfortunately that would be the story of the day with BAC not being clinical enough and St Brendans showing why they finished as the top team in the league.

There were some high points for BAC with the new centre partnership defending incredibly well and the scrum half showing good pace for a break away try in the second half. There were some not so good moments such as the left winger taking a great high ball only to be turned over, leading to the St Brendans prop out pacing the BAC number 8 for a try. St Brendans were not immune to mistakes either with their hooker being sent off in the first half for striking an opposition player, unfortunately BAC could not exploit the man advantage.

There were two amusing moments for BAC on the day, the first saw the fullback fail to field a kick first time only to see it go between his legs (the preverbal “nutmeg”) before he eventually recovered the ball. The second being the left winger being unable to work out where the touch line was and taking a pass nearly a metre in touch. As BAC had the advantage the incident did not affect the game but certainly gave both sidelines something to laugh about and the winger something to contemplate for the long off season!