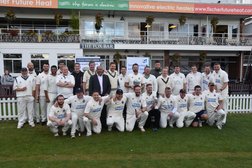 Latest news from the Competition

The semi finals of the Police National Cricket Knockout and Giffard Plate will take place on Wednesday 25th July.

Staffordshire will host Northumbria & Durham at Blythe CC hoping for a reversal in fortune when the teams met in the 2018 Final which ended in defeat for them. (Photo of both teams attached from 2017 Final)

In the other semi final Essex will entertain Dyfed-Powys at Elmstead CC where they will be looking to overcome 2 previous defeats by a Dyfed side with plenty of experience and former BP players in their ranks.

The Final will take place on Thursday 6th September at the Fischer County Ground (better known as Grace Road) the home of Leicestershire CCC.

Meanwhile in the Giffard Plate Devon and Cornwall have already reached the Final following a concession by Nottinghamshire.
They await to play the winners of West Midlands Alliance (Mids / Mercia & Warwicks) who will host South Wales and Gwent also on Wednesday 25th July at Bromsgrove CC.

Both competitions have been Sponsored by Police Credit Union who have given their support for the last 9 years.