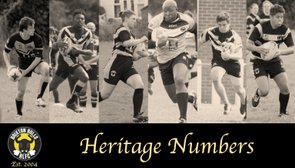 To mark the history of the Open Age sections of the club we have issued every player, to play for the Men's and Women's teams, a heritage number.

The club was founded in 2004 and ran as a junior club until 2016, when the Men's Open Age team was founded. The Men played their first match against Sussex Merlins and have since won two London Championship Grand Finals. The Women's Open Age side played their first match in 2018, against Nottingham Outlaws, and we look forward to hopefully reinstating the Women's section of the club in the near future.

Numbers 1-4 have been issued to the people that were most influential in the creation of the Open Age section of the club to honour their efforts and commitment. All players that have an asterisk next to their name are products of the Bulls Junior system. These players are a credit to the Mini and Junior section of the club and the brilliant job that's been done by our coaches, to keep them in the game and enabling them to show their talent.