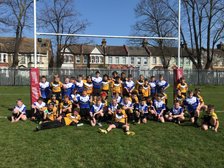 U12s win but U10s are beaten in great event

Brixton Bulls played host to Keighley Albion U10s and U12s at Streatham & Croydon Rugby Club on Saturday. Albion brought a touring party of 35 players, and close to 100 supporters for the trip to London.

Keighley were too good for the Bulls in the U10s, being both well drilled and also having a significant size advantage. However, the Bulls never gave up, and scored several good tries, including long range efforts from Nate Thomas, Frazer Marmont-Robertson, Leo Parker-Sumner and Danny Jones, while Logen Gyoni showed both great technique and extraordinary bravery in his tackling. There is plenty to build on for the future, as the side contained a number of Year 4s, while the Keighley team was all Year 5s. Kevonne Jackson was nominated the Bulls' Player of the Match.

In the U12s, the tables were turned, with the Bulls showing a good combination of pace, power and skill along with excellent organisation from half-back, Dylan Robson. They ran out 28-4 winners with tries from Hamza Zidour, Etienne Barry, Ryan Jones and Trey Marshall, while Robson kicked 4 of 5 conversions. Loose forward Zidour's strong running was particularly impressive, while hooker, Jones, was awarded the Bulls' Player of the Match thanks to his quality distribution, sniping runs and brave defence.

Many thanks to all the Bulls supporters, and particularly to Rugby League Legends, Paul Sculthorpe and Martin Offiah, for their good luck messages.